SIX in 10 adults have now had both doses of Covid vaccine – as Britain races towards Freedom Day.

NHS heroes have delivered more than 31.5million second doses of Covid vaccine, just five million short of the goal before re-opening on July 19.

New data from the Office for National Statistics yesterday showed nearly nine in 10 (86.6 per cent) of adults in England now have antibodies, either from vaccines or Covid infection.

Deaths from Covid remain low in the UK. A further 27 were recorded yesterday – the highest since the start of May, but still a fraction of the hundreds who were dying every day at the start of the year.

“I’d say we’re on track for re-opening on July 19. We will watch vigilantly, but the data over the last week or so has been encouraging. It shows that the vaccine is working in getting us out of this.”

Around 31.5million second jabs were delivered, just five million short of the goal before the last stage of unlocking on July 19[/caption] 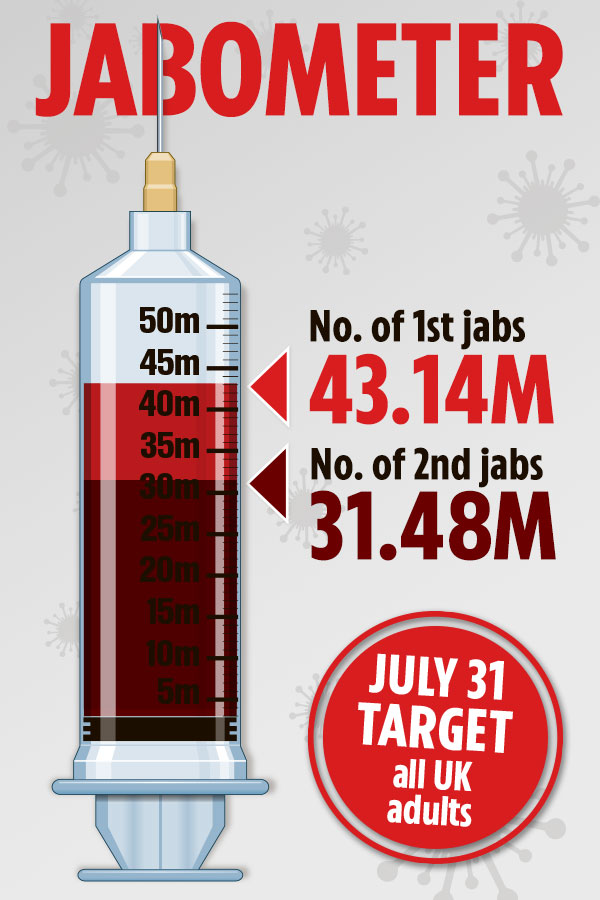 The exact number of vaccines given in England was not available yesterday due to a computer glitch. However, even without England’s daily update, the UK total showed 59.8 per cent of adults had been given both doses. Sources said the true number was more than 60 per cent.

It’s estimated that at least 70 per cent of adults will need to be fully vaccinated for the UK to achieve herd immunity. On Sunday, SAGE scientist Dr Susan Hopkins said: “We should be able to hit the 70 per cent figure of people with two doses before July 19.”

Yesterday, ONS figures showed the number of people over 16 with Covid antibodies from jabs and infections has surpassed that level already – at 85 per cent.

Among people over 34 the figure is more than 90 per cent, and in the 60 to 79 age groups it is more than 95 per cent. Prof Paul Hunter, of the University of East Anglia, said: “This is a remarkably high rate and most of this will be due to the impact of vaccines.”

Prof Kevin McConway, of the Open University, said: “These figures provide more evidence of the success of the vaccination programme. The percentage of people who have had two vaccine doses has increased pretty rapidly in the UK. Investigations of vaccine effectiveness against severe disease, particularly involving the Delta variant, have shown how important it is to have both doses.”

Sarah Crofts, of the ONS, said: “Across the UK at least 80 per cent of adults now have some level of antibody protection against Covid. With infection levels now increasing again in England, this protection will hopefully protect the majority against severe symptoms.”


Will I need a Covid booster vaccine and when will it be available?


Delta variant: What are the symptoms in adults and children?

Walk-in “Grab a Jab” sessions targeted at younger people are being set up in areas where vaccine uptake is lower.

Yesterday, Matt Hancock said work is underway to see if Covid booster shots can be given alongside flu jabs after experts warned of a potential flu epidemic this winter.

Mr Hancock said: “We do expect this winter to be challenging, but we are working hard to manage it.” 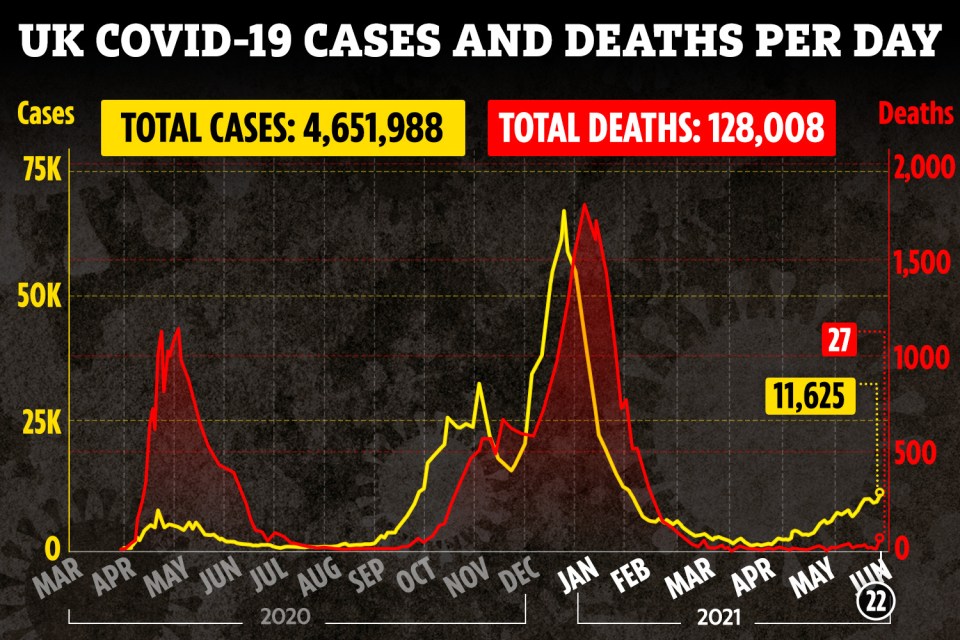 A MUM died after dismissing cancer symptoms as postnatal issues from giving birth to twins. Charity fundraiser Laura Stephenson, 36, thought her body was readjusting when she felt unwell until hospital...