Ancient shaman staff shaped like a viper and ‘used to cast mystical spells’ dug up after 4,400 years

A REMARKABLY well-preserved 4,400-year-old carving of a snake has been unearthed in Finland.

The wooden artefact measures half a metre (20 inches) long and is shaped like a serpent – possibly a viper – slithering along the ground.

A well-preserved 4,400-year-old carving of a snake has been unearthed in Finland[/caption]

Archaeologists believe the stick may have been used for mythical purposes by a Stone Age shaman.

The discovery was made at the site of Järvensuo in southwest Finland, which was occupied from 4000 to 2000 BC.

Järvensuo is a wetland site, providing the ideal conditions for the preservation of wooden artefacts long after most rot away.

Archaeologists described their findings in a research paper published in the journal Antiquity on Tuesday.

“I have seen many extraordinary things in my work as a wetland archaeologist, but the discovery of this figurine made me utterly speechless and gave me the shivers.”

The life-size figure, which is 2.5 centimetres (one inch) thick, was carved from a single piece of wood, according to Dr Koivisto.

It’s “very naturalistic”, researchers wrote in their paper, and resembles a grass snake or a European adder.

Archaeologists carry out excavations at the site in southern Finland[/caption]

Experts believe the staff is between 4,000 and 4,400 years old. Snakes held a special role among the shamans of Northern Europe at the time.

“There seems to be a certain connection between snakes and people,” said study co-author Dr Antti Lahelma from the University of Helsinki.

“This brings to mind northern shamanism of the historical period, where snakes had a special role as spirit-helper animals of the shaman.

“Even though the time gap is immense, the possibility of some kind of continuity is tantalizing: Do we have a Stone Age shaman’s staff?” 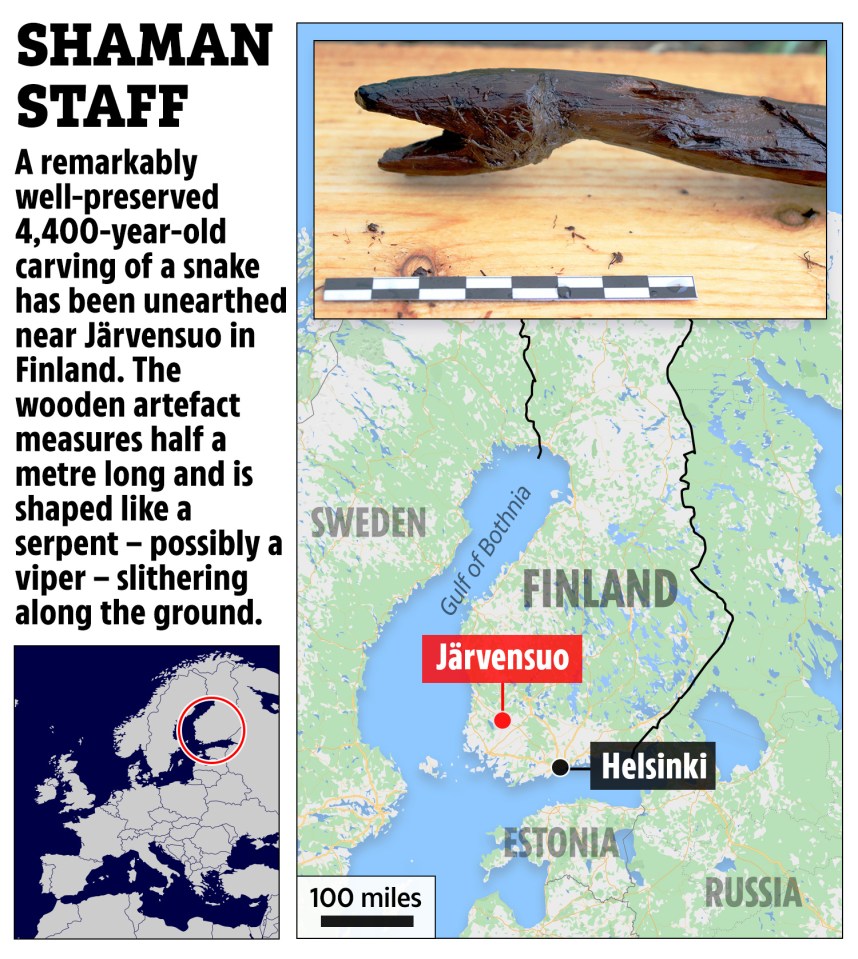 Järvensuo, a prehistoric lakeshore, was discovered by accident by ditch diggers during the 1950s but was not fully excavated at the time.

Archaeologists began work at the site once again in 2019, and alongside the snake have found wooden utensils, structural remains and fishing gear.

This indicates Järvensuo was home to more practical activities as well as the possible rituals involving the snake figurine.

As such, the site can provide a snapshot of all aspects of ancient life.

“Well-preserved finds from wetlands help our understanding of ancient peoples and the landscape where they performed both mundane and sacred activities,” said Dr Koivisto.

Most read in Science


Genius trick gets kids to eat more vegetables with NO effort, scientists say


What is the Starlink internet speed and how much does it cost?

In other archaeology news, a 2,000-year-old Roman chariot has been discovered “almost intact” on the outskirts of the doomed city of Pompeii.

a rare photo has shown that Stonehenge was built like Lego using carved studs and holes.

The mystery over who built Stonehenge may finally have been solved after experts uncovered “Britain’s first city” a mile away.

And, the face of a 1,000-year-old Viking warrior woman with a gruesome battle wound across her skull has been revealed.