When is Richard Branson’s Virgin Galactic space launch and how can I watch it?

BILLIONAIRE Richard Branson is about to blast off to the edge of space – before a safe return to Earth.

But when will the tech mogul take off with Virgin Galactic, and how can you watch it live? 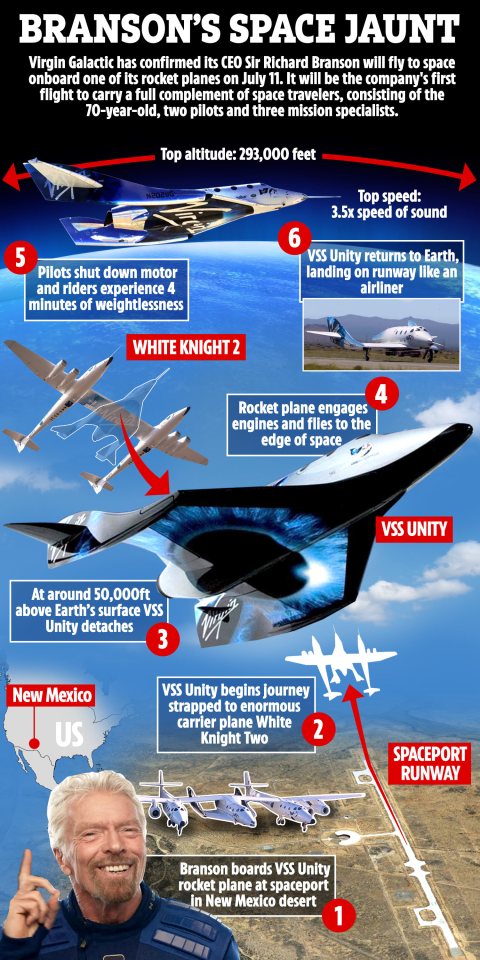 Sir Richard’s space tourism firm Virgin Galactic will be flying its boss to space on July 11.

Branson’s “Unity 22” mission will liftoff from Virgin Galactic’s spaceport in the New Mexico desert on July 11, according to the company.

But that could change last minute if weather conditions are deemed unfavourable in the lead up to launch.

For the first time, Virgin Galactic will livestream the test flight for people to watch along at home.

You can also follow along with the latest using our Richard Branson liveblog.

Most read in Tech


GTA 6 release date, news and rumours – EVERYTHING we know so far


When will PS5 be in stock at GAME, Argos, Currys and Amazon?


iPhone 13 release date REVEALED? Here's when you can finally upgrade

In other news, scientists have identified the place where aliens are most likely lurking in the Milky Way.

Aliens may have dropped life-detecting sensors onto Earth, according to a Harvard University professor.

China has successfully launched three astronauts into orbit to build its own space station.

And, the European Space Agency has revealed it will be sending a probe called EnVision to study the planet Venus.