BORIS Johnson tonight warned “this pandemic is not over”and opened the door to future lockdowns after next Monday’s Freedom Day.

The PM confirmed plans to rip up the majority of restrictions on July 19 but begged Brits not to go crazy and stick to strict new guidance.

Boris Johnson announced the changes at a presser tonight[/caption]

Although the final stage of lockdown easing will go ahead masks will still be encouraged indoors and the hated vaccine passports will be revived.

And in a bleak shift in tone the PM said he “hoped” the roadmap will be irreversible but admitted: “We rule nothing out”.

Laying bare the soaring daily infections chief Government scientist Sir Patrick Vallance said there is “no doubt we are not in a third wave”.

Prof Chris Whitty also warned of an “exit wave” as the legal restraints are flung off after 18 months of lockdown.

The PM begged Brits not to go wild, saying the unlocking “should not be taken as an invitation by everybody to have a great jubilee”.

But he said now was the time to plough ahead with the easing rather than wait until the winter when the NHS was under strain.

The PM said: “It is absolutely vital that we proceed now with caution. And I cannot say this powerfully or emphatically enough.

“This pandemic is not over. This disease coronavirus continues to carry risks for you and for your family.

“We cannot simply revert instantly from Monday 19th July to life as it was before Covid.”

After 18 months of lockdown Health Sec Sajid Javid earlier told MPs the Government will be ploughing ahead with the fourth and final step of the roadmap next week.

He said the four crucial tests – the vaccine rollout continues at pace; jabs are cutting serious illness; infections don’t risk crippling the NHS; there are no emerging worrying variants – have been passed.

Mr Javid told MPs: “We’ve looked closely at the data against these four tests and we firmly believe that this is the right time to get our nation closer to normal.

“So we will move to the next stage of our roadmap on July. And to those who say why take this step now – I say, if not now, when?”

In a sobering prediction he said soaring infections would “get worse before they get better” and repeated warnings of 100,000 cases a day this summer.

But Government modelling suggests hospitalisations and deaths will be nowhere near the level of previous peaks thanks to the UK’s jab rollout.

Shadow health secretary Jon Ashworth said: “Instead of caution, he’s putting his foot down on the accelerator while throwing the seat belts off.”

PAPERS FOR THE CLUB

Large venues such as nightclubs – and possibly pubs – will be encouraged to introduce a Covid certification system from next week.

Under the controversial proposals – previously ruled out by Downing St – firms will be encouraged to permit people based on their Covid status.

Hospitality bosses have railed against vaccine passports and venues will not be compelled to introduce the certification system.

To those who say, why take this step now? I say – if not now, when?

It is not clear if pubs will be encouraged to adopt the vaccine passports, with Mr Javid saying they will be expected in “high risk scenarios”.

Although the vaccine passports will only be advice to begin with, fresh guidance says: “If sufficient measures are not taken to limit infection,
the Government will consider mandating the NHS COVID Pass in certain venues at a later date.”

In May Mr Johnson stressed he had zero intentions of using such documents domestically after Freedom Day, insisting: “I don’t see any prospect of certificates to go into pubs or anything else.”

But No10 sees it as a necessary check to prevent packed nightclubs – where masks won’t be encouraged – becoming Covid hotbeds.

MASKS TO STAY (IF YOU WANT)

Clubs are one of the few crowded indoor places Brits won’t be urged to wear a face covering.

Refusing to wear a mask on public transport or in shops will no longer warrant fines but people will be still asked to mask-up.

The PM last week urged people to use their own judgement when deciding when to put a mask on, but Downing Street appears to have toughened its stance over the past week and will publish strong advice.

No10 said shops will have now legal right to enforce mask-wearing in their stores.

Tory MPs are already hitting back, with senior backbencher Sir Graham Brady this morning vowing to bin his covering next week.

The PM will also encourage workers to gradually return to the office to breathe life back into Britain’s cash-starved high streets.

Mr Johnson confirmed last week the work from home guidance would be lifted next Monday and it would be down to employers.

The PM’s spokesperson said today: “If they can we expect and recommend a gradual return to the workplace, over the summer.”

The guidance means legal lockdown will be stripped back to to just a handful of requirements such as isolating when contacted by Test and Trace.

IF NOT NOW, WHEN?

Double-jabbed Brits will be exempt from quarantine from August 16 but will have to put up with hunkering down for another five weeks.

All the rules will be reviewed in September, before the 23rd when the current crop of remaining Covid restrictions expire.

MPs fear it could pave the way for backsliding and a return to restrictions in the winter. 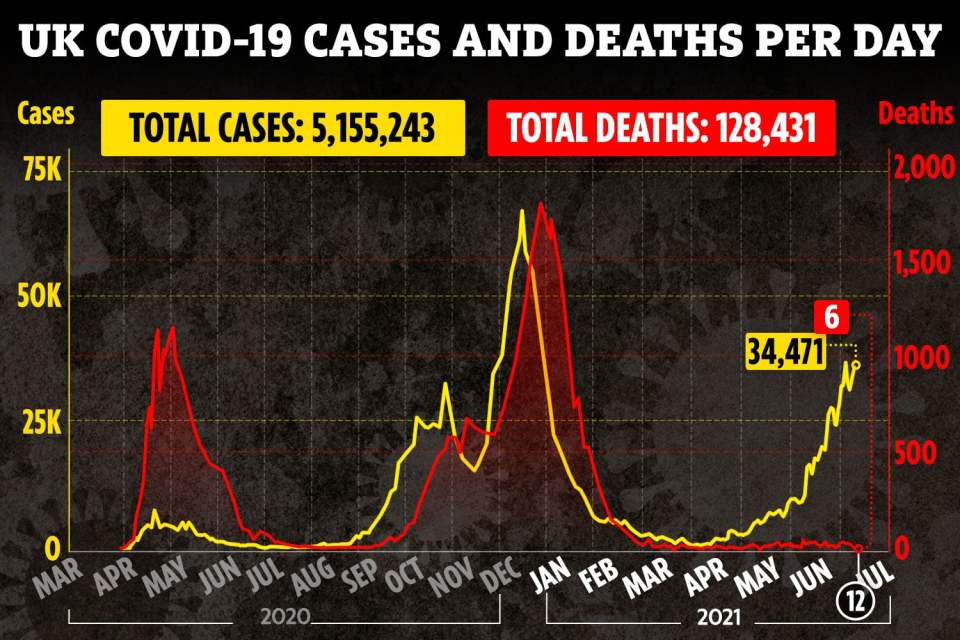 BRITS are holding out hope for a bonus bank holiday EVERY YEAR to salute the Queen’s lifetime of service. A legion of voices are calling for June’s special long weekend to mark...

James Bond and Olympics are on the way, so cheer up… it’s no time to cry