STUART HOGG has been accused of ‘BITING’ South Africa star Willie le Roux as he faces trial by social media.

Fans piled in on Twitter as clips went viral of what they believed showed the Lions fullback chomp on Le Roux’s arm.

The footage from the Second Test is inconclusive, though, and it is unknown if ex Wasps man Le Roux has, or will, make a complaint.

Hogg’s face brushes up to Le Roux’s arm before the Scotland skipper is pushed off him.

Springboks supporters were also furious at other images circulating after the bitter and bloodthirsty grudge match when it appears that second row Maro Itoje is kneeling on Damian de Allende’s neck.

The citing officer is set to have a busy day as he picks apart the brutal Second Test which South African won 27-9.

And it was hardly just the Lions who were guilty of any acts of foul play.

Kolbe’s nasty mid-air hit on Conor Murray only earned him a yellow card at the time.

But after the Lions scrum half landed on his head, that one has to be looked at again.

De Klerk could also be in trouble for his no-arms hit on Murray.

Lions chief Gatland then piled into rival Erasmus for his 63-minute online video rant at officials in the build-up.

With the series level at 1-1 ahead of next weekend’s decider, Gatland said: “We’ve got systems and processes in place and hopefully World Rugby does look at that in terms of making sure that everyone follows the protocols. That’s important.

“I won’t be going on social media this week and I will let other people take care of it.

“The last thing we need is a war of words and being accused of certain things.

“I hope it doesn’t get to a situation where we end up with things on Twitter and not through the proper channels.

“I found it quite strange that approach was taken. It is not something I will get involved in, it is important we keep the integrity in the game as much as we can.”

The players are very disappointed. Next Saturday is a cup final, that is how we have to look at it.

Gatland told his side to prepare for changes and also expects disciplinary chiefs to have another look at Kolbe’s mid-air tackle on Murray, which could be upgraded from a yellow to red card.

The Kiwi coach added: “The players are very disappointed. Next Saturday is a cup final, that is how we have to look at it.

“We’ll look at the tape and whether we need to bring fresh faces in.”

Springboks skipper Siya Kolisi produced the performance of his life after slamming the referee last week for showing him no respect.

The World Cup winning captain said: “That was the hardest week we ever faced.

“The pressure was huge, like the World Cup but more because this is only once every 12 years.

“We said we were going to go all-out. It’s game-on next week. We’ll do nothing different. We’ll do what we did today – but even harder.” 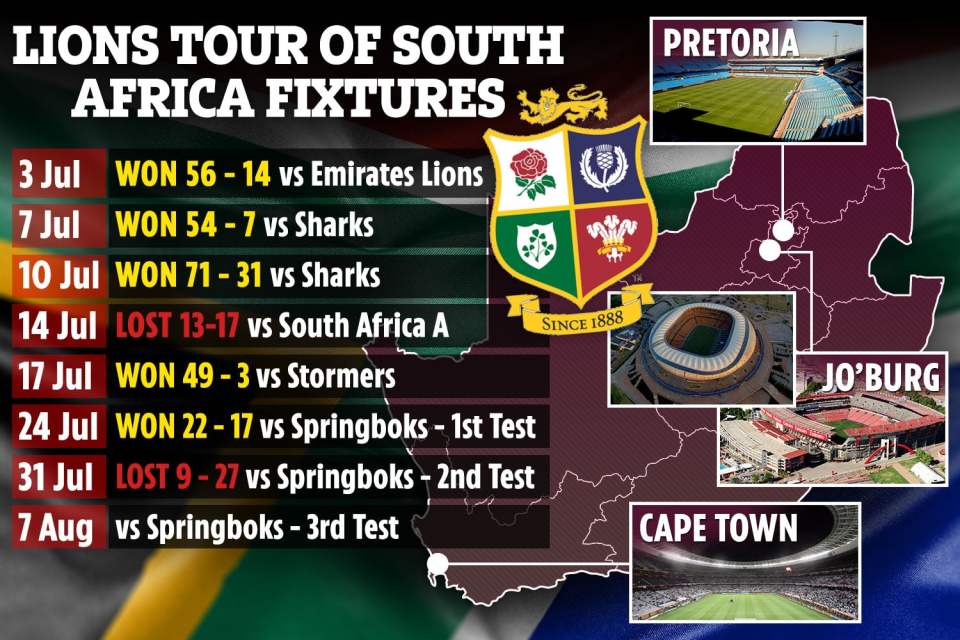 
Lions 2021 Tour Diary: Scrum and Base are no more as Navicii takes over


Who is Siya Kolisi's wife Rachel, when did they marry and do they have kids?


Why does the South Africa national anthem have two songs?


Do the British and Irish Lions have a national anthem?

After seeing a first-half try scrubbed out, Lions centre Robbie Henshaw urged his teammates to dig in to save the series.

The Ireland ace said: “It’s very tough, it’s Test match footie. It’s a final next week and it’s all to play for.”

The Lions failed to score a single point in a toothless second half and Henshaw added: “It’s those small things that didn’t fall our way. We’ve a lot of work to do.

“We need to look each other in the eye and come back stronger. It’s all to play for. It’s finals rugby, the top level. Everyone is going to be up for it.”

IRELAND close the 2021/22 edition of the Women’s Six Nations tournament with a mouth-watering match against Scotland. The Irish will be still licking their wounds having recently been annihilated by England...