AN ASTEROID known as Bennu will pass within half the distance of the Earth to the Moon in the year 2135, scientists said Wednesday.

The probability of an impact with our planet in the coming centuries, however, is very slight, according to an analysis of the object’s trajectory.

The good news is that scientists have a better handle on Bennu’s whereabouts for the next 200 years.

The bad news is that the space rock has a slightly greater chance of clobbering Earth than previously thought, according to the study.

“We shouldn’t be worried about it too much,” said Davide Farnocchia, a scientist at Nasa’s Jet Propulsion Laboratory in Pasadena, California.

While the odds of a strike have risen from 1-in-2,700 to 1-in-1,750 over the next century or two, scientists now have a much better idea of Bennu’s path thanks to Nasa’s Osiris-Rex spacecraft, according to Farnocchia.

“So I think that overall, the situation has improved,” Farnocchia, the lead author of the new paper, told reporters.

The spacecraft is headed back to Earth on a long, roundabout loop after collecting samples from the large, spinning rubble pile of an asteroid.

Bennu is one of the two most hazardous known asteroids in our solar system and remains one of the most likely to hit Earth.

Osiris-Rex is due to return to Earth with with its samples in 2023.

Most read in Tech


Is YOUR iPhone, Gmail and Microsoft password going to be hacked?


Top-secret Google Maps locations you CAN see – including Area 51

Before the probe arrived at Bennu in 2018, telescopes provided solid insight into the asteroid, about one-third of a mile (one-half kilometer) in diameter.

The spacecraft collected enough data over two and a half years to help scientists better predict the asteroid’s orbital path well into the future.

Their findings published in the journal Icarus should also help in charting the course of other asteroids.

They should also give Earth a better fighting chance if and when another hazardous space rock heads our way.

Before Osiris-Rex arrived on the scene, scientists put the odds of Bennu hitting Earth through the year 2200 at 1-in-2,700.

Bennu will have a close encounter with Earth in 2135 when it passes within half the distance of the moon.

Earth’s gravity could tweak its future path and put it on a collision course with our planet in the 2200s. That’s less likely now based on Osiris-Rex observations.

If Bennu did slam into Earth, it wouldnt wipe out life, dinosaur-style, but rather create a crater roughly 10 to 20 times the size of the asteroid, said Lindley Johnson, NASA’s planetary defense officer.

The area of devastation would be much bigger: As much as 100 times the size of the crater.

“If an object Bennus size hit the Eastern Seaboard, it would pretty much devastate things up and down the coast,” he told reporters.

Scientists already are ahead of the curve with Bennu, which was discovered in 1999.

Finding threatening asteroids in advance increases the chances and options for pushing them out of our way, Johnson said.

“One-hundred years from now, who knows what the technology is going to be?” he said.

In November, Nasa plans to launch a mission to knock an asteroid off-course by hitting it.

The experimental target will be the moonlet of a bigger space rock.

One space rock expert previously revealed to The Sun what it would feel like for blitzed onlookers in the asteroid’s immediate blast zone.

“You will get little warning and will be vaporised, like sitting at ground zero of a large nuke. Nothing will survive,” Dr David L Clements, of Imperial College London, told The Sun.

“If it hit London then it’s goodbye to London and everything and everyone in it, and significant damage to anything closer than Birmingham.

“The impact of Bennu hitting the Earth would be the equivalent of a very large nuclear bomb going off,” he added.

The situation wouldn’t be much cheerier 10 miles from the impact, either.

The strike would create so much heat that you and everything around you would be enveloped in flames.

“You’ll be incinerated by the thermal flash from a fireball 275 times brighter than the Sun,” said Dr Clements.

“Clothing, wood, trees, grass ignite and you’ll suffer third-degree burning from the flash before the ignited fires get you. It will be a firestorm.

“The blast will destroy pretty much all buildings and 90 per cent of trees will be blown down.

He added: “The blast arrives about 50 seconds after the flash so everything will be on fire already.” 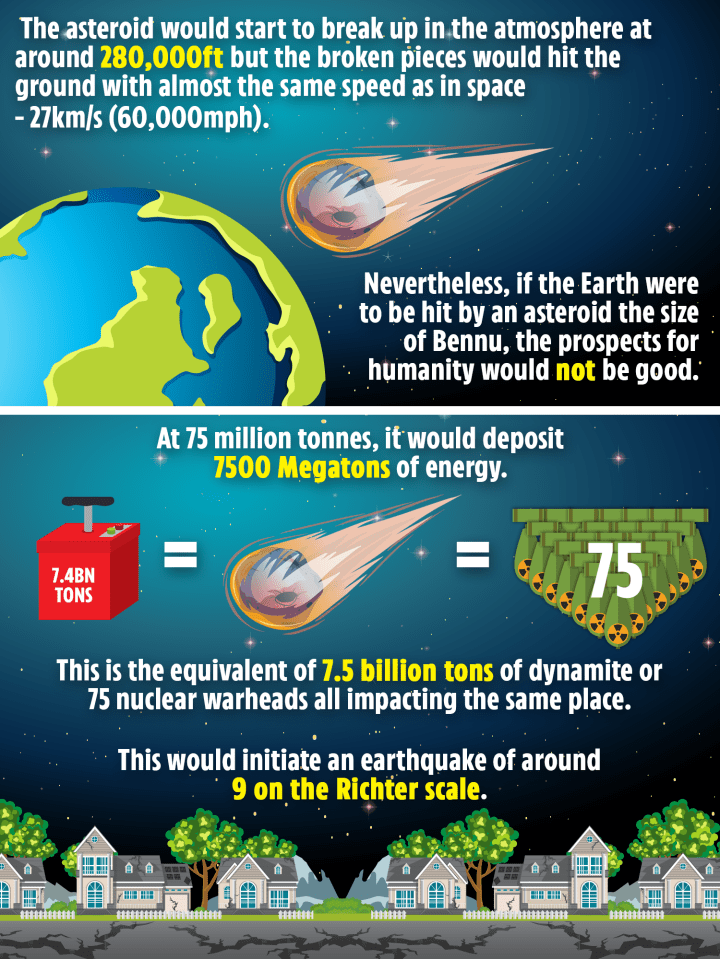 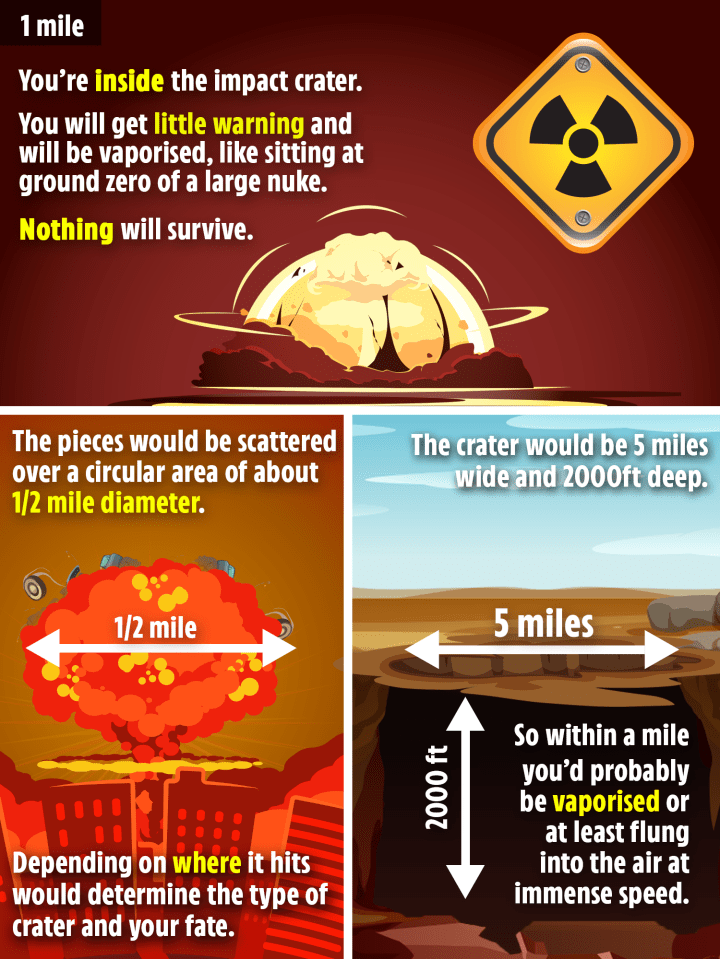 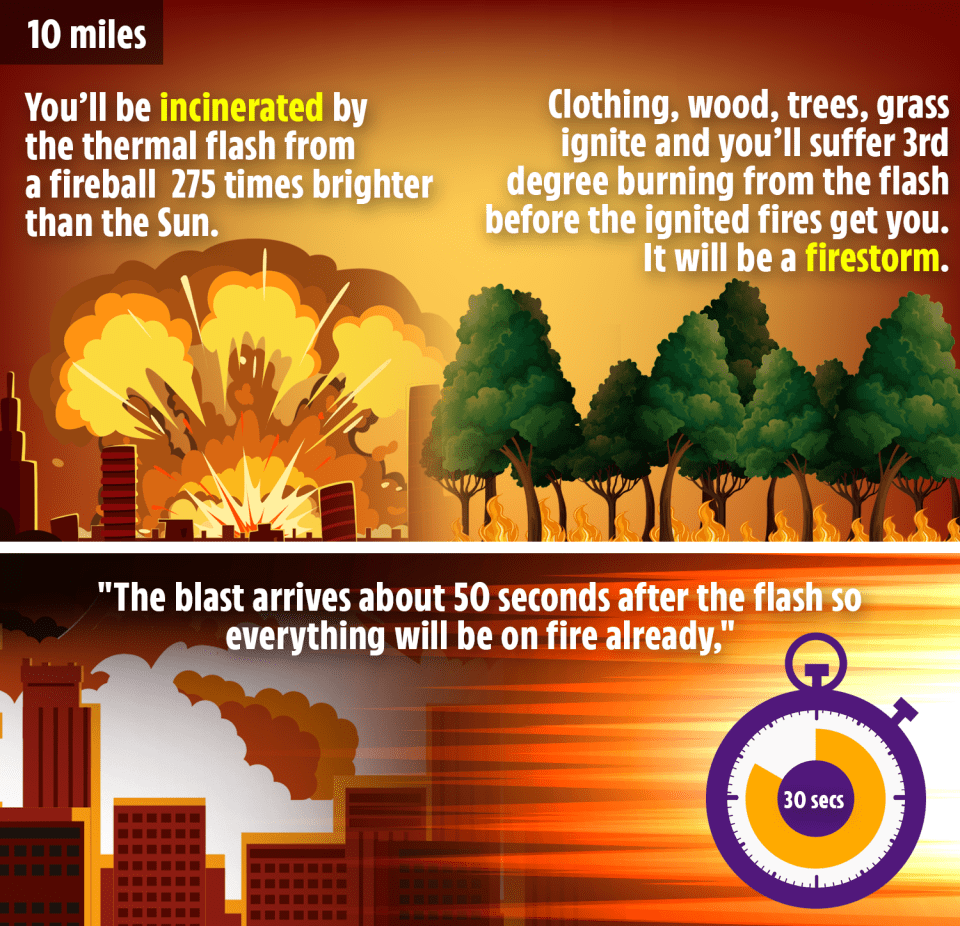 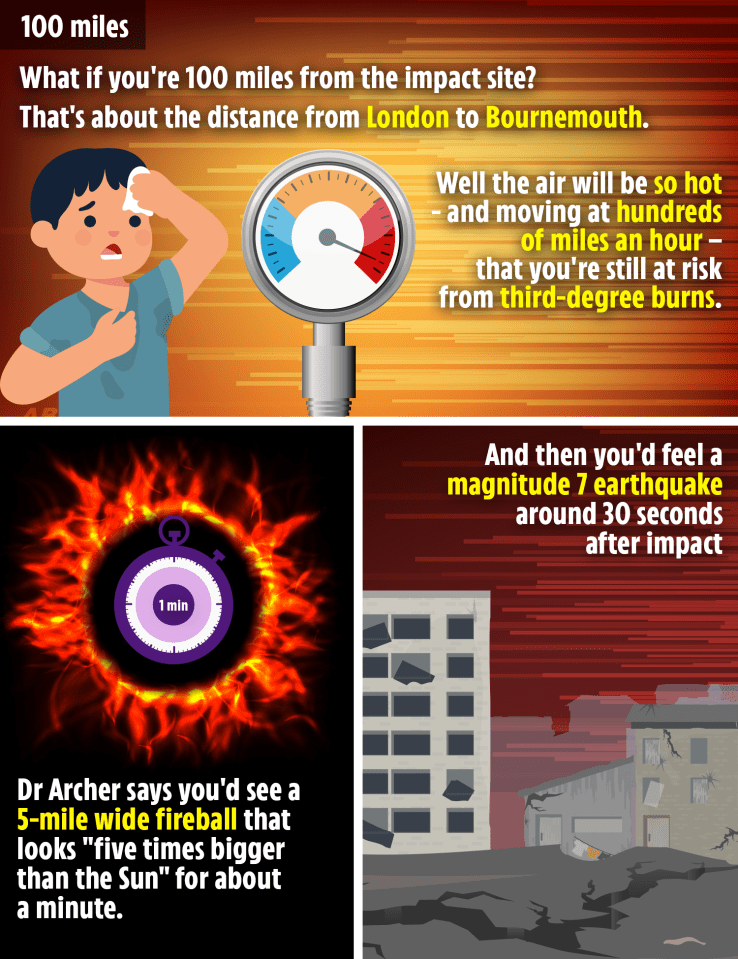 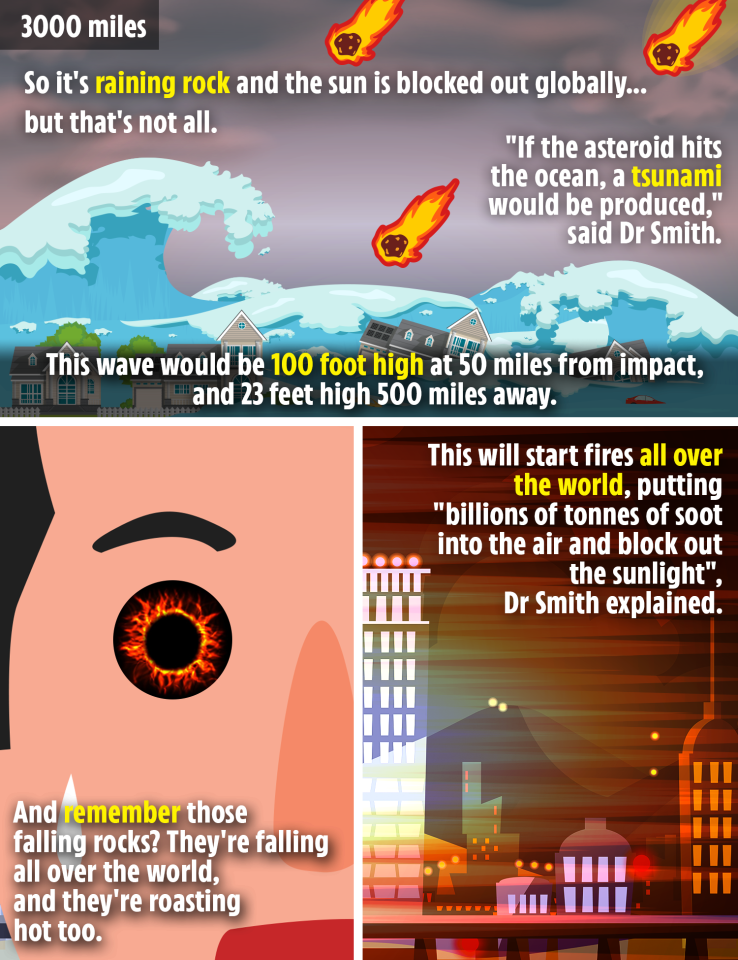 
Boy, 14, charged with murdering hero dad, 45, as he ‘protected his daughter’


Gunman unmasked after shooting 5 dead including girl, 5, before killing himself

In other news, Nasa’s Perseverance rover has created breathable oxygen.

Nasa recently completed the first controlled flight on another planet following the lift-off of its Mars helicopter-drone, Ingenuity.

Nasa has baffled space fans by releasing an image of what appears to be a rainbow on Mars.

And, the mystery surrounding what looks like giant spiders on the surface of Mars may finally have been solved.

10 best places to live in Holloway