ARCHAEOLOGISTS have unearthed hundreds of thousands of bones in a gruesome underground cave in Saudi Arabia.

The remains belong to at least 14 different kinds of animal, including cattle, horses, camels and rodents – as well as humans.

Writing in a recent research paper, the team behind the find suggested the bones were carried there by hyenas over the past 7,000 years.

The hollowed cave, called Umm Jirsan, is a winding systems of lava tubes – hollowed cylinders of rock left behind by volcanic activity many moons ago.

It sits beneath the volcanic fields of Harrat Khaybar, and extends 1.5 kilometres (0.9 miles), making it the longest lava tube in Arabia.

Scientists have been examining the sprawling conduit system for well over a decade, and in the latest expedition analysed the many bones found there.

“This lava tube is chock-a-block with hundreds of thousands of beautifully preserved animal remains,” study author Dr Mathew Stewart from the Max Planck Institute for Chemical Ecology in Germany wrote on Twitter.

To find out precisely how the bones got there, Dr Stewart and his colleagues analysed the location and frequency of cuts and scratches on the bones.

They conclude that the bones at Umm Jirsan were brought in by striped hyena, a species of hyena native to the Middle East.

They’re said to be avid collectors of bones, which they haul back to their dens to be eaten, fed to young, or stored for later use.

Striped hyena skeletal remains were also found in the cave, as well as their fossilised poo, lending credit to the new theory.

Back in 2013, researchers working at Umm Jirsan even reported hearing growling sounds, suggesting the bone store may still be in use.

Dr Stewart said that the cave bones are unusually well-preserved, offering a unique insight into the biodiversity of the region spanning several thousand years.

He tweeted: “The material at Umm Jirsan has accumulated over the last 7,000 years, attesting to the excellent conditions for preservation of bone within the lava tube.

“In a region where bone preservation is very very poor, sites like Umm Jirsan offer an exciting new resource.”

The research was published in Archaeological and Anthropological Sciences.

The remains belong to at least 14 different kinds of animal, including cattle, horses, camels and rodents – as well as humans[/caption]

The hollowed cave, called Umm Jirsan, is a winding systems of lava tubes[/caption] 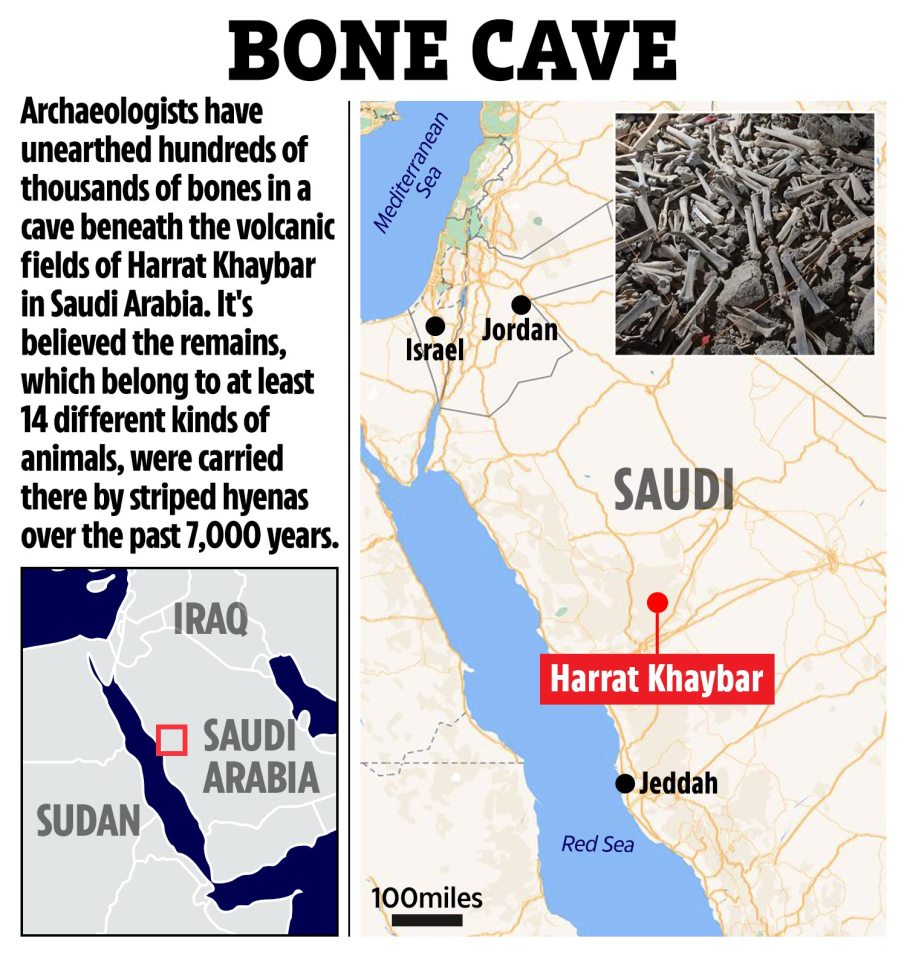 In other news, prehistoric humans may have been responsible for the extinction of the Woolly Mammoth after all, according to research.

Lost Bronze Age graves have been discovered near the site of Stonehenge after 4,000 years.

The mystery over who built Stonehenge may finally have been solved after experts uncovered “Britain’s first city” a mile away.

And, the face of a 1,000-year-old Viking warrior woman with a gruesome battle wound across her skull has been revealed.