GRISLY human remains of ancient farmers who worked in one of the world’s driest deserts have been examined as part of a new study.

The battered skeletons were found in the Atacama Desert in modern day Chile and date back 3,000 years.

The skeletons are eerily preserved due to dry conditions[/caption]

Lethal wounds could be seen on some of the skulls[/caption]

The brutal conditions of their dry work place weren’t the only thing they had to deal with though.

The skeletons show how the farmers lived in a time of social tension that led to violence and murder.

The researchers write in their study: “The emergence of elites and social inequality fostered interpersonal and inter- and intra-group violence associated with the defense of resources, socio-economic investments, and other cultural concerns.

“This study evaluated violence among the first horticulturalists in the Atacama Desert in northern Chile during the Neolithic transition between 1000 BCE – 600 CE. Furthermore, it analyzed trauma caused by interpersonal violence using a sample of 194 individuals.”

The 194 skeletons investigation were all adult and came from ancient cemeteries in the desert’s Azapa Valley.


US is finally waking up to Sleepy Joe Biden's cosmic uselessness

This was said to be one of the richest and most fertile valleys that the ancient farmers could have been based in.

The skeletons are creepily well preserved because of the dry conditions and some even have soft tissue and hair.

Around 21% of the skeletons also showed evidence of “interpersonal violence”.

This includes skull holes and fractures that would have caused extreme pain.

Around 10% likely died from lethal blows.

Weapons like maces, sticks and arrows could have caused the trauma.

The researchers write: “Some individuals exhibited severe high impact fractures of the cranium that caused massive destruction of the face and neurocranium, with cranio-facial disjunction and outflow of brain mass.”

The fights could have been over land, water and resources.

The full study findings can be found in the in the Journal of Anthropological Archaeology. 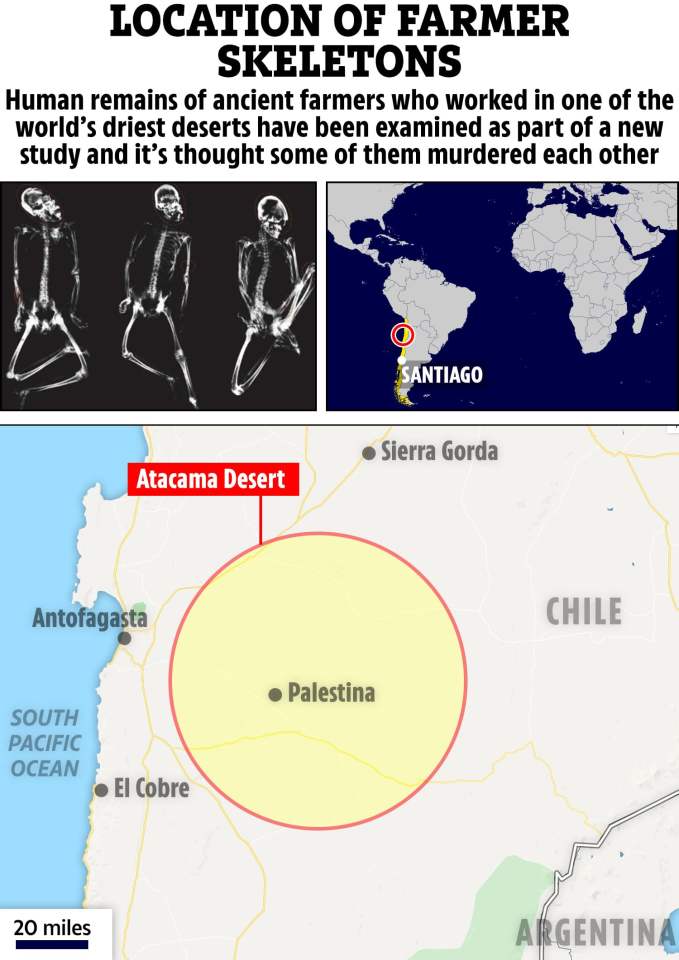 The farmers could have been fighting over land and resources[/caption]

194 skeletons were studied for the research[/caption]

In other archaeology news, a ship that sank after it was hit by gigantic stone blocks following an earthquake 2,200 years ago has been found in Egypt.