A HUGE space telescope that “can see back in time” will launch into orbit on December 18.

Nasa has confirmed the date for the historic launch of the James Webb Space Telescope – branding it the “premier deep space observatory for the next decade”. 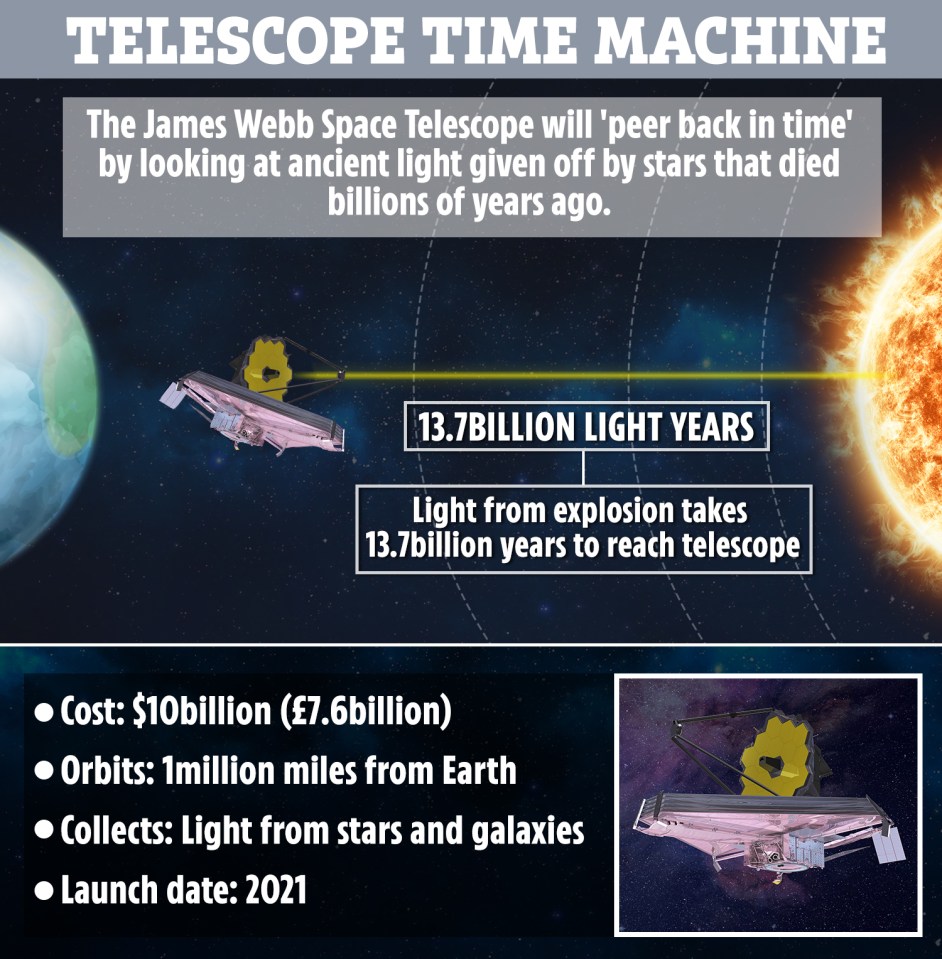 Nasa has completed final tests on the JWST, which is seen here being prepared for shipment to the final launch site[/caption]

The epic mission will see the JWST scan alien atmospheres and peer back to the dawn of time.

Put together by Nasa and aerospace company Northrop Grumman, the $10billion (£7.6billion) machine has been plagued by delays and setbacks.

However, it appears it’s finally on track to head into space in before Christmas, giving scientists the chance to “look into the past”, according to its creators.

The project has taken 24 years to complete with the help of thousands of scientists and engineers.

These experts come from 24 countries across three space agencies – Nasa, the Canadian Space Agency and the European Space Agency.


Primary school deputy head, 44, charged over rape of girl under 13

It can peer 13.7billion light-years (that’s about eight with 22 zeroes afterwards in miles) through space because it’s orbiting extremely far from Earth.

For most space telescopes, Earth’s thick atmosphere obscures readings – but the JWST won’t have that problem.

One of the probe’s goals is to find new planets outside of the Solar System and scan their atmospheres for signs of aliens.

Specifically, it will look for oxygen on alien worlds, one of the key ingredients for life as we know it.

The JWST will also “look back in time” by scanning light given off by extremely distant galaxies and stars.

This ability to “time travel” is based on the fact that even light has a speed limit.

The further you peer into space, the more time has passed since the light you are looking at set off on its journey towards you.

So if a star explodes 6billion light-years away, the light from the event will take 6billion years to reach Earth – effectively allowing us to see through time.

Professor Alistair Glasse, of the UK Astronomy Technology Centre, said: “Light takes a finite team to reach us because it doesn’t reach our eyes instantly.

“The further away an object is, the longer that light has been travelling before we detect it.

“With the telescope we can look as far away as the edge of the visible universe.

“The age of the universe is about 13.5billion years and we can say light has been travelling that long before it reaches us.”

JWST is three times larger than its predecessor the Hubble telescope and 100 times more powerful thanks to its vast gold-plated mirror.

The massive primary mirror, stretching 21ft across, is made up of 18 hexagons each the size of a coffee table and weighing 46 lbs.

The beryllium components are coated with a fine film of vaporised gold to bounce infrared light into the sensor equipment.

“I am inspired by our dedicated team and our global partnerships that have made this incredible endeavor possible.

“Together, we’ve overcome technical obstacles along the way as well as challenges during the coronavirus pandemic.

“I also am grateful for the steadfast support of Congress.

“Now that we have an observatory and a rocket ready for launch, I am looking forward to the big day and the amazing science to come.”

In other news, Elon Musk says SpaceX can put astronauts back on the Moon by 2024.

Musk is working on a Tesla robot that looks like a human – and will perform “boring or dangerous tasks”.

And Nasa’s Mars helicopter has been whizzing across the red planet.

Reader comments, Google ad-blocking and the moderation dilemma for publishers