No Result
View All Result
NEWSLETTER

ANCIENT evidence of a catastrophic ‘cosmic airburst’ is being linked to the Biblical story of the destruction of Sodom in a new study.

Researchers claim to have found 3,600-year-old evidence of a space rock blast that wiped out the ancient city of Tall el-Hammam.

Evidence of extreme temperatures has been found at the site[/caption]

Evidence includes pottery shards that were partially melted into glass and melted building materials in a 5-foot layer of burnt ground in the Jordan Valley.

The researchers explain in their study: “We present evidence that in ~ 1650 BCE (~ 3600 years ago), a cosmic airburst destroyed Tall el-Hammam, a Middle-Bronze-Age city in the southern Jordan Valley northeast of the Dead Sea.”

They added: “There is an ongoing debate as to whether Tall el-Hammam could be the biblical city of Sodom.”

Although they do clarify that finding out whether Tall el-Hammam is Sodom is beyond the “scope” of their investigation, they do consider whether the ‘air burst’ event could connect the two.

The study states: “Regarding this proposed airburst, an eyewitness description of this 3600-year-old catastrophic event may have been passed down as an oral tradition that eventually became the written biblical account about the destruction of Sodom.”

DON’T GIVE A MONKEYS


Gangs of wild MONKEYS are kidnapping puppies & ‘holding them hostage’


Boyfriend, 31, 'told mum partner was pregnant' before 'killing her & 3 kids'

The archaeological evidence all points to a high-temperature event that technology at the time could not produce.

This led the researchers to compare their findings to an airburst in 1908 referred to as the Tunguska Event.

That event saw a 56-60-metre meteor crash through Earth’s atmosphere and explode in the sky.

The explosion was the equivalent to 185 Hiroshima bombs.

More than 80million trees were knocked down over a remote area covering 830 square miles.

Miraculously, no one was killed, but if the meteor had burst over a city it could have massacred millions.

The study suggests a similar cosmic event levelled the city of Tall el-Hammam.

Human remains in the area also suggests a deadly hot demise for the people who lived there.

The full study has been published in the journal Nature Scientific Reports. 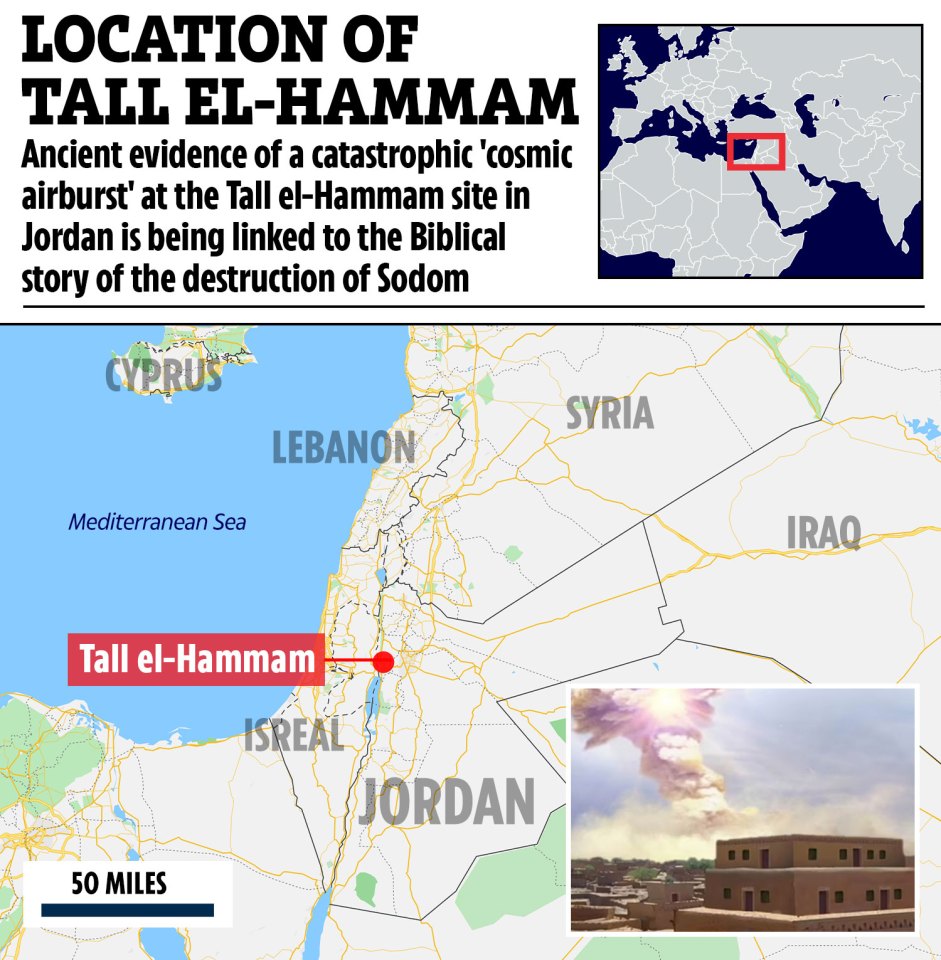 The site is located near the Dead Sea[/caption]

In other news, the tomb of an ancient Egyptian king who lived around 4,500 years ago has been restored and opened to the public.

A ship that sank after it was hit by gigantic stone blocks following an earthquake 2,200 years ago has been found in Egypt.

And, new analysis of the remains of an ancient Egyptian pharaoh has revealed he may have been brutally murdered on the battlefield.

STAR Trek legend William Shatner has been blasted in space, becoming the world’s oldest EVER astronaut at the incredible age of 90. Shatner, who played Captain James T Kirk in the sci-fi...

ANOTHER solar storm is expected to be visible in the UK – and could cause havoc with the power grid. Experts think there’s a chance a solar flare eruption could cause...

BRITAIN’S rarest fish is using a “bypass” to return to waters where its ancestors were often seen more than 180 years ago. Green campaigners are celebrating after the Twaite shad was...

IT MAY seem like the plot of a science fiction film but some scientists think it will be possible to bring ancient animals back to life. To clone an animal, scientists...

AN unusual fossil with a series of spikes has been revealed to be the remains of a new species of dinosaur. The fossil of an ankylosaur rib, found at the Boulahfa...

ELON MUSK’S SpaceX firm has tweeted footage of the first Earth views from its civilian flight. The space company made history last night when it successfully launched the first all civilian...

Curated trips, photography, and thrilling experiences to satisfy your wanderlust

What causes the Northern Lights?

What are the symptoms of E. Coli and how can it be treated?

World Mental Health Day: What is the 2021 theme?

Hiking fuel duty in next week’s Budget would be ‘grotesque’ insult to drivers, warn MPs