STARGAZERS are in for a festive treat this holiday season as six planets light up the night sky at once over the UK.

Jupiter, Saturn and Venus are visible throughout December, and they’ll be joined by Mercury, Neptune and Uranus next week.

The best time to see all six in one evening will be from December 28 to January 3, roughly half an hour after sunset.

According to the BBC’s Sky at Night Magazine, the planetary parade offers a “great astronomical event” for both amateur and seasoned astronomers.

That’s because the celestial light show will be visible through binoculars or a small telescope, with many of the planets viewable with the naked eye.

“This will be a great astronomical event for beginners, for young astronomers and children,” the magazine said.

“Because these events happen close to sunset, it’s worth remembering to wait until the Sun has completely set before observing.

“Catching the Sun with the naked eye or through binoculars or a telescope could seriously damage your eyesight.”

Venus, Saturn and Jupiter will be lined up in the twilight sky just north of the Sagittarius and south of the Aquarius constellations.

Venus will be the brightest, lowest planet, with Jupiter the second brightest but highest. Saturn, in the middle, will be a little darker.

On December 28, an additional trio of planets will make their appearance.

Mercury will lie close to Venus above a flat southwest horizon around 40 minutes after sunset.

You’ll need a low, flat horizon and likely a pair of binoculars to see it. Make sure you wait until the Sun has fully set to avoid damaging your eyes.

Neptune and Uranus will appear a little later, once true darkness has set at around 6:00 p.m. UK time.

To spot them, look south of the Aries constellation and north of Sagittarius.

If you’re having trouble spotting them, you can always use a smartphone app to locate constellations and planets in the night sky.

Make sure you give your eyes a break from your phone afterwards though, as stargazing is best when your eyes have adjusted to the dark. 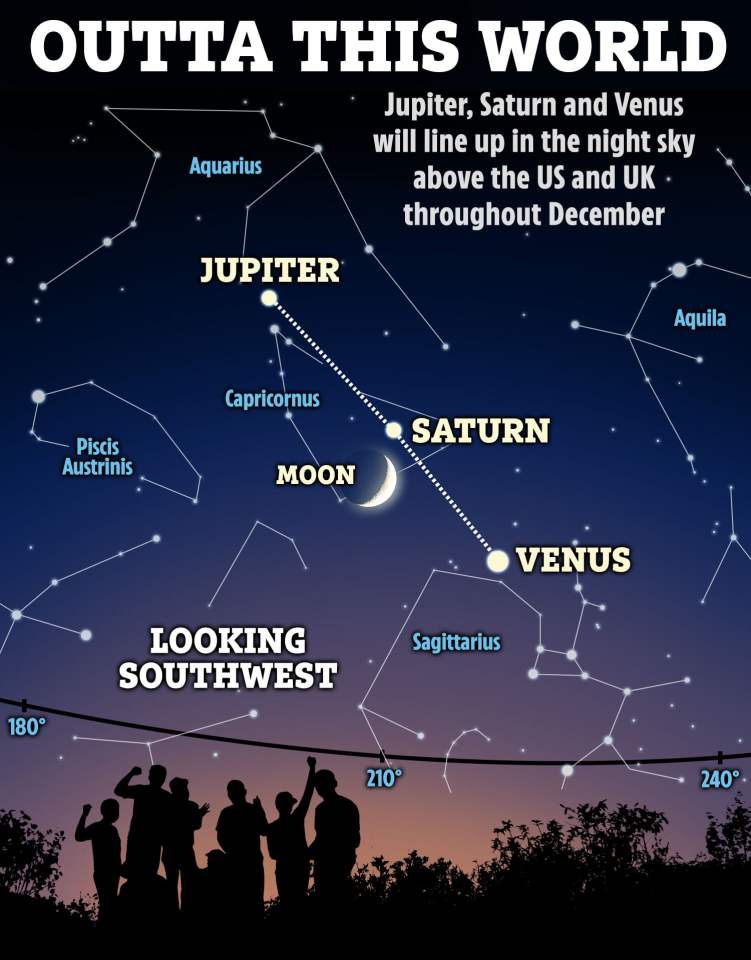 In other news, one of the best-preserved fossils ever found has confirmed that young dinosaurs burst from their shells just like baby birds.

And, Samsung is reportedly killing off its beloved Note smartphone after more than a decade.