POLICE chiefs have asked for details to be left out of the upcoming report into No 10 parties – throwing its publication into doubt.

The Met confirmed today it has told Whitehall enforcer Sue Gray to redact parts of her dossier that cover the events officers are investigating.

In a statement the force said including anything more than “minimal” information about the most serious bashes could prejudice its own probe.

Scotland Yard added: “For the events the Met is investigating, we asked for minimal reference to be made in the Cabinet Office report.

“The Met did not ask for any limitations on other events in the report, or for the report to be delayed.

“But we have had ongoing contact with the Cabinet Office , including on the content of the report, to avoid any prejudice to our investigation.”

The full Gray Report will still be published but only after police inquiries have wrapped up, which could take weeks.

It leaves the top civil servant now facing the choice of putting out a watered down version in the meantime or withholding the whole thing.

There have been almost 20 alleged parties, with officers only probing those that would represent the most serious breaches of Covid laws at the time.

Technology minister Chris Philp said No 10 still hadn’t received this report as of this morning and doesn’t know when it will be published.

Boris Johnson yesterday reaffirmed his commitment to release the dossier in full but wouldn’t definitely say some parts wouldn’t be redacted.


Monster gave Angel a life sentence but he'll be out in two years, say family


Currys driver sacked over 'creepy texts' to customers 'has lost everything'

And the intervention from the Met will fuel fears the original version may prove to be a whitewash with any damning evidence kept back until later.

Labour says the probe must be published “in its entirety” and No 10 “cannot be allowed to cover-up or obscure any of the truth”.

Nazir Afzal, a former Chief Crown Prosecutor, said the Met’s excuse for demanding redactions from the report was “absolute nonsense”.

“They just have to follow the evidence, of which the report will be a part.”

It comes after The Sun revealed its publication, which will make or break Boris Johnson’s future, could be delayed by weeks.

There are now fresh doubts over whether Sue Gray’s document can be published while a police investigation is ongoing.

Top government legal advisers argue that her findings into alleged No 10 lockdown breaches must be delayed until after the Met inquiry concludes.

That could be weeks away. Met commissioner Dame Cressida Dick had planned to wait for the Cabinet Office report to be released before deciding whether to launch a probe.

But she performed a spectacular U-turn on Tuesday in the face of criticism.

External lawyers have told the Government they face an HR nightmare if Ms Gray’s report is released and she names people currently subject to a separate police investigation.

But that legal advice could still be overruled with a watered down version of the report being put out.

A Whitehall source said: “Anything worth reading will now have to be held back.

“So there comes a point in deciding if it is even worth publishing until it can be run in full.”

Another government figure admitted: “Cressida has completely f***ed it all up.”

Ms Gray is said to be still pushing for publication, with Downing Street chiefs insisting they want to see the findings.

Today Lord Frost, the one-time Brexit talks boss, writes in The Sun: “The future of Boris Johnson’s government needs to be settled in the next few days.”

And backbench Tory rebel ringleader Mark Harper claimed: “The report must be published in full.

“Any attempt to conceal or suppress crucial details would be wrong.”

Senior civil servants and political aides are expected to get a major dressing down from Ms Gray for their bad behaviour during lockdown.

Sources claim those close to the PM will be accused of putting him at huge risk and offering him duff advice.

The uproar comes as the Tory revolt against the PM continues to fizzle out — with MPs fearful they will get “rebel’s remorse” if they knife Mr Johnson.

Last night, Tory MP Connor Burns, who faced ridicule for saying Boris was “ambushed by cake” at an event in June 2020, added another twist to the tale.

He claimed in a podcast interview: “I’m told, under some authority, that there actually wasn’t a cake.” 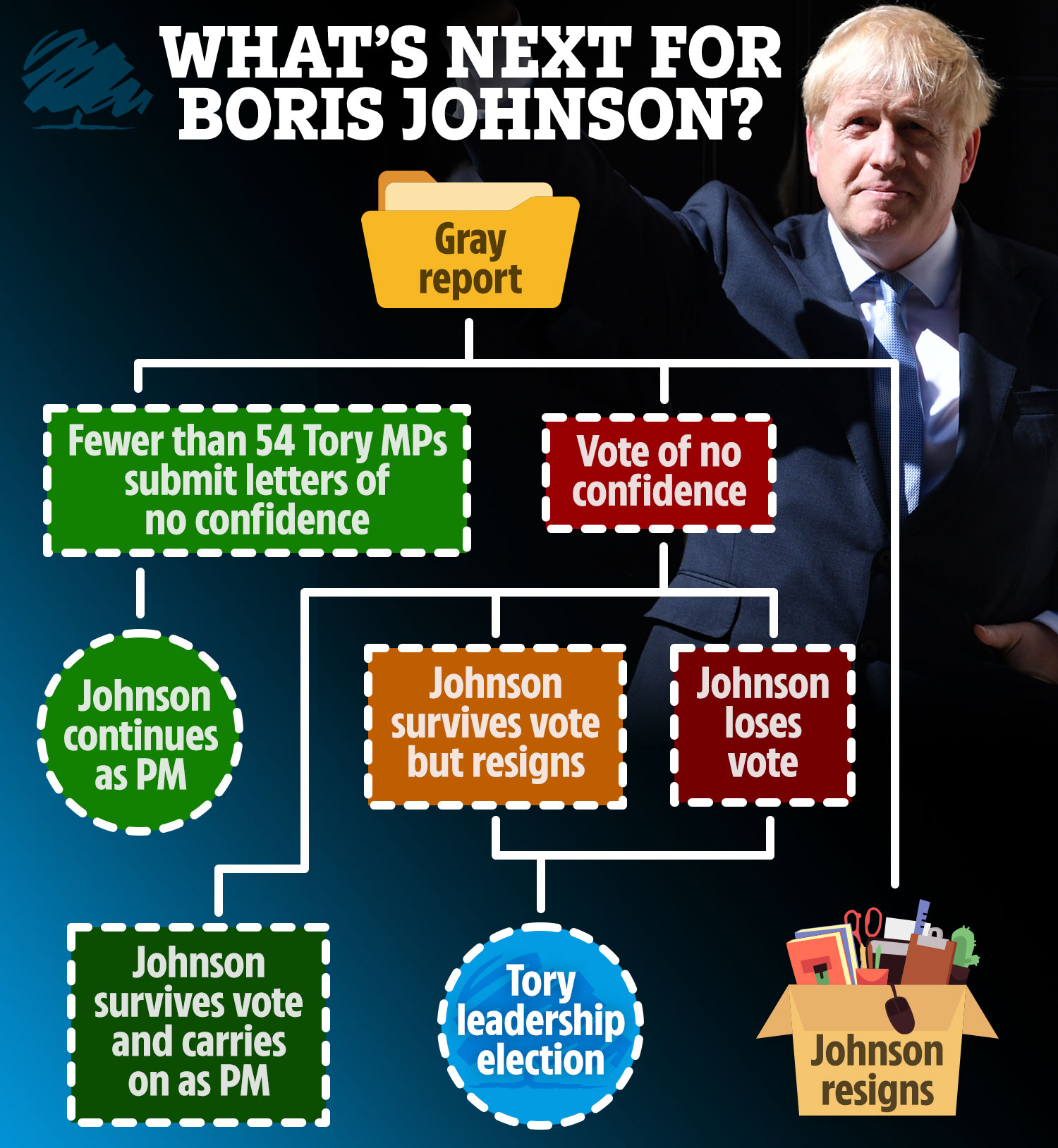 RISHI Sunak and Liz Truss will battle head-to-head before Sun readers during a showstopper TV debate on Tuesday. The Sun’s Showdown: The Fight for No.10 will air live on The Sun’s...

TORY leadership candidates will lock horns tonight in the first TV debate that could dramatically flip the contest on its head. With everything to play for, the final five wannabe PMs...