THE LONGEST partial lunar eclipse of the century is happening later this week.

Nasa has said the celestial show will happen in the early hours of the morning of November 19. 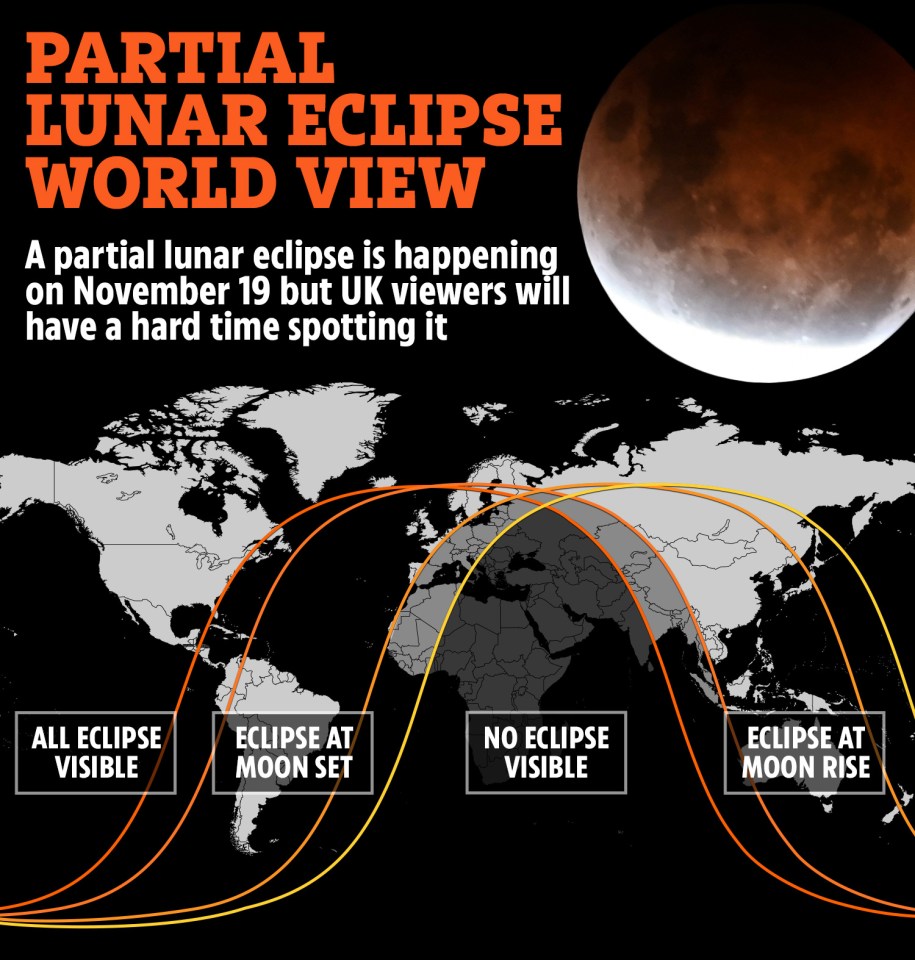 It will involve the Earth’s shadow covering about 97 per cent of the full Moon.

It will be best viewed from North America where it should be visible for over three hours.

Viewers in the UK will only catch a small glimpse if they’re lucky.

The part of the Moon that is visible during the eclipse will look a reddish colour.


Chaos after 'stabbing and acid attack' at funfair as seven arrested

How to watch the partial lunar eclipse

It’s bad news if you’re not in North America.

The Royal Greenwich Observatory has said that the partial lunar eclipse is “barely visible in the UK”.

However, people in North America have the chance to view the eclipse in its entirety because it will happen during night time there.

Those in western Asia, Australia and New Zealand should catch the later stages.

Africa or the Middle East will not see the eclipse because it won’t be night time there.

South America and Western Europe may catch some of it.

The Moon sets a few minutes after this in the UK so unless you have a great view of the north western horizon then you might not see the eclipse at all.

There will be YouTube live streams of the event though.

Time and Date will be covering the whole eclipse live so you could tune in even if the Moon isn’t visible in your area.

In other news,Nasa’s top boss has slammed Russia after a missile it fired into one of its own satellites forced the space station to perform an emergency swerve.

A 75-year-old Brit has told of his anger after scammers on WhatsApp fooled him into sending them hundreds of pounds.

Google Chrome users are being warned to delete the browser amid fears highly sensitive data is being harvested.

And, Facebook has announced that it’s changing its name to “Meta”.