RUGBY UNION chief executive Bill Sweeney is recovering in hospital after suffering a blood clot on lung, the governing body has confirmed.

Sweeney was admitted on Friday and the RFU said he is “expected to make a full recovery and return to work” following a period of recuperation.

Bill Sweeney is in hospital after suffering a pulmonary embolism[/caption]

Sweeney joined the RFU in 2019 after spending five years as chief executive of the British Olympic Association.

The RFU statement read: “Bill Sweeney, RFU CEO, was admitted to hospital on Friday and he is being treated for pulmonary embolism.

“Bill is expected to make a full recovery and return to work, he is in good spirits and is being well looked after.

“Bill will be recuperating for the next few weeks; initially in hospital but returning home soon. 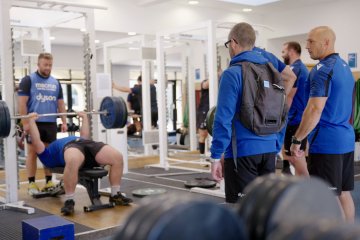 “In the interim, the RFU executive team will ensure Union matters continue to be managed effectively working closely with Tom Ilube, RFU Chair, and the rest of board as needed.

“Bill would like to convey his strongest possible appreciation for the NHS who perform such incredible work.”

Sweeney joined the RFU in 2019 after a six-year spell with the BOA during which he oversaw Britain’s performances in the Winter Olympics at Sochi 2014 and Pyeongchang 2018, as well as in the Summer Games at Rio 2016.


Why do the Ireland rugby team sing Ireland's Call as national anthem?

His earlier business career included senior roles at adidas and Puma, and corporate management with Shell, Mars and Unilever.

Although a lifelong rugby supporter, Bill was initially a schoolboy footballer at Chelsea and then English Universities captain.

He switched to rugby first with Aberdeenshire RFC and then Abu Dhabi, Rosslyn Park FC and Weybridge Vandals RFC.

He now has strong connections at Richmond FC.