A PENSIONER jokingly guards her purse — from Rishi Sunak.

The tax-happy Chancellor had a chuckle with his constituents as he opened a village fete yesterday.

The get-together in Great Ayton, North Yorks, was organised to celebrate the Platinum Jubilee.

And Mr Sunak, MP for Richmond, was happy to get into the celebratory spirit.

Labour leader Sir Keir Starmer had an oarsome day at the Olympic Park in East London — helping to row a boat on the River Lea for the London Youth Rowing Big Jubilee Lunch. 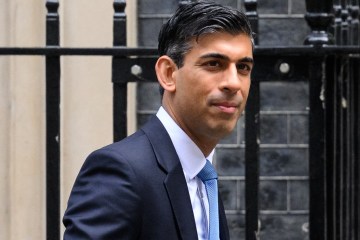 Mr Starmer was pictured rowing at the Olympic Park[/caption]

WHAT WILL WE DO?


Britain's Got Talent fans devastated by news about the show tonight

LABOUR descended into open civil war today as Angela Rayner defied Sir Keir Starmer to declare: “I back the strikers.” Sir Keir had ordered his frontbenchers to keep their distance from...

BRITS face the biggest nationwide shutdown in a century after the militant RMT boss refused to rule out a general strike. Leftie agitator Mick Lynch threatened to plot “coordinated” walkouts with other...