NICOLA “one-note” Sturgeon is at it again.

In a letter sent to Prime Minister Boris Johnson this week, the Scots Nat leader says the Scottish people must be given another referendum on their membership of the United Kingdom.

At this point you may, like me, have a sense of having seen this movie before. It is only eight years since the Scots last went to the polls in a “once in a lifetime vote” on Scottish independence.

On that occasion the nationalists — then led by odious Alex Salmond — went down to a clear defeat. Fifty-five per cent of Scottish voters said “no” to independence.

Then, as now, the SNP only has one tune. A policy based on a single belief. Or rather a single grievance. Or prejudice.

Whatever question you ask the SNP they always have the same answer: Independence from England. 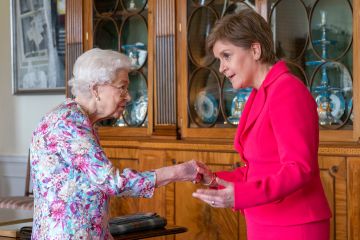 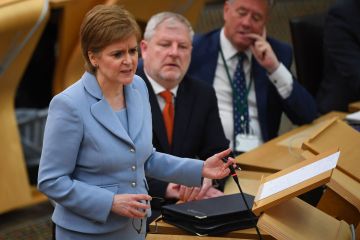 And so in her letter this week, Sturgeon once again insists that the Scottish people need a vote.

Again she threatens the Prime Minister. Not just by insisting that a referendum must be held on October 19 next year. But by saying that she is taking the issue to the Supreme Court for a ruling.

It is a typically arrogant and ignorant effort by Sturgeon. She writes to the Prime Minister as though she is the sovereign of a foreign land.

A medieval Queen writing to an inferior, demanding that he sue for peace. “Although the Court action is in progress, I continue to stand ready to negotiate the terms”, she writes in her letter of demands.

Who is the leader of the Scottish executive that she thinks she can dictate like this? She isn’t even firmly in power in her own “land”.

The SNP didn’t get a governing majority in the Scottish elections last year.

Her party only governs because it is in coalition with the Greens.

Yet she writes with the haughtiness and arrogance of a dictator-for-life.

Of course she behaves like this because she is used to not just being in power but has long been able to lie without consequence.

Throughout her political life, Sturgeon has based her political beliefs — or rather bigotries — on a single idea that is backed up by none of the facts.

For instance, for years the SNP claimed that they would fund an independent Scotland on the proceeds of North Sea oil.

They seemed to think that if they could only cut away from the UK they would be like Saudi Arabia or the Middle Eastern Gulf States.

They would be able to pump oil and live like Sheiks. Just with a few more midges.

It was always a lie. Not least because the oil does not belong to them. But in recent years the lie has become even more grotesque. Because the price of oil has plummeted in recent years, before going up again only recently.

Sturgeon wants to rip Scotland from the UK at a crucial moment in our history.

If Scotland had gone independent in 2014 then the bankrupt country would have gone begging to England to rejoin the union just as they did in 1707 when they were broke and bust.

Worse now is that Sturgeon and Co don’t even believe in North Sea oil. Captured by the ideas of the loony Greens, the SNP is now fiercely against oil, gas and fossil fuels.

Presumably they think they could run an independent Scotland’s energy off a solar grid.

Good luck to them on that! But none of these details matter. Because if they were ever tested then the Scottish voters would have a lot more to worry about.

Scotland is a more than equal partner to the rest of the UK. In fact, it is a privileged partner. It actually benefits far more than England does in terms of the percentage of the budget that it enjoys.

The Scottish government is only able to afford policies like free university for Scottish students because they are paid for by taxpayers in England.

If Scotland ever did go independent, all such financial benefits would stop. Do the Nats have any answer to this? Only one. Rejoin the EU! Yes, that has now become Sturgeon’s fallback policy.

She tells disgruntled Remain voters in Scotland that while the evil Westminster took them out of the EU, the bonny Edinburgh Parliament would take them back in.

Well again, good luck with that, because there is no reason why Spain and other EU member states would not veto that plan immediately. Allowing Scotland to sail off solely on her own.

Some people say “call her bluff — give her referendum and be done with it”.

But it is too big a risk. Sturgeon wants to rip Scotland from the UK at a crucial moment in our history.

Passengers offered £8,200 to fly the next day – here’s how you could get it

She wants to tear up our country, tear apart families and put a border through our nation. She cannot be allowed to get away with it.

Her list of demands should be returned to their haughty sender.

Business Coach Rina Slusnyte: How to Sell Your Knowledge and Make € 10K a Month When you are Just Starting Out