GARETH ANSCOMBE may have missed the birth of his child by a few hours this week – but there was no missing the posts to secure a piece of Welsh rugby history.

Having delayed joining the tour for as long as he could, his baby boy was born while he was flying to South Africa.

And he capped a momentous week by converting Josh Adams’ 78th-minute try from the touchline.

The victory saw Wales win in South Africa for the first time after 11 consecutive defeats.

Wales had to fight back from 12-3 down in the last 15 minutes after a string of Handre Pollard penalties at the start of the second half threatened to scupper their hopes.

But Saracens prop Sam Wainwright, who has yet to start a Premiership game, stepped off the bench late on to win a scrum penalty from Wales struck. 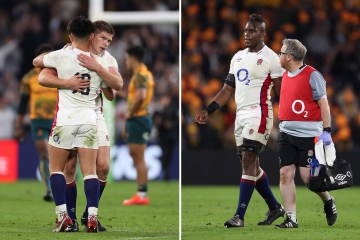 It was sweet revenge for last week’s agonising last-gasp defeat in Pretoria and sets up a series decider in Cape Town next week.

And it capped a stunning day for the Home Nations after wins for England and Ireland in the southern hemisphere.

Jubilant head coach Wayne Pivac said: “Gareth is a quality kicker and I always had faith in him that he’d get that kick.

“There was so much passion in the changing room at half-time. The boys wanted to get the job done, especially after last week.


Porter brace secures first EVER Irish away win against All Blacks

“It wasn’t easy but we stayed in it to the end to get that final chance – and we took it.”

The Boks had made a surprising 14 changes for this match – and it backfired with a disjointed performance.

However World Cup winner Pollard put Wales on the back foot with his kicks and when Dan Biggar was taken off injured and Alun Wyn Jones was binned – it looked bleak for Wales.

But the Dragons kept their cool to set up the late winner and silence the Toyota Stadium.