TWICKENHAM is set to ban trans women from playing against female athletes in a major U-turn.

RFU chiefs had cleared trans women to continue to play women’s rugby in 2020, arguing that more evidence was required before imposing a ban.

But the English game will now move into line with World Rugby policies by implementing the blanket ban on trans women playing full contact women’s rugby before the new season starts.

The decision follows a lengthy review since the original decision, with a survey receiving more than 11,000 responses.

An RFU spokesperson explained: “The review and consultation concluded there are physical differences between those people whose sex was assigned as male and those as female at birth.

“Advantages in strength, stamina and physique brought about by male puberty are significant and retained even after testosterone suppression. 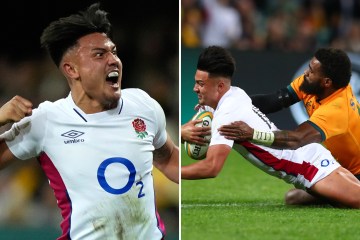 Jones’ side make history after coming from behind to beat rivals

Dream Team’s BACK! All you need to know before you go for £100k prize pot

“This science provides the basis of the recommendation that the inclusion of trans people assigned male at birth in female contact rugby cannot be balanced against considerations of safety and fairness.

“Until such time as new science is available, a precautionary approach is appropriate to ensure fair competition and safety of all competitors.”

The new policy has been recommended for the RFU’s ruling Council to approve imminently following the “medical, scientific and social information”.

Twickenham added: “Given the difficulties in identifying a credible test to assess physiological variables, it is recommended that operating on a case by case basis is no longer a viable option at this time.

“Therefore, the RFU Council will vote on a recommendation for a policy change for contact rugby to only permit players in the female category whose sex recorded at birth was female.

“In the male category it is proposed that players whose sex recorded at birth is female may play if they provide their written consent and a risk assessment is carried out.

“This is a complex and difficult decision and the recommendation has not been made lightly or without thorough and full research and consultation.”

The RFU insisted it was “committed to supporting and encouraging opportunities for everyone to participate in rugby including non-contact formats of the game and through coaching, refereeing or volunteering roles”.

Its decision follows recent global bans on trans women competing against other women in both rugby league and swimming.

RFU bosses say they have already contacted registered trans female players who will be immediately impacted “to offer support in continuing to encourage them to participate in the sport”.