What is a scrum in rugby union?

IT takes 16 beefy rugby players, patience and a whole lot of power – but the scrum is what makes rugby union truly unique.

Because the ball is largely hidden once it enters the scrum, armchair viewers can often be left baffled by what is going on.

Players have to be in position to get the scrum started, a process which is closely policed by referees[/caption]

But this is a handy guide to help you get to grips with things, so scrum and have a go if you think you’re hard enough…

What is the point of a scrum?

The aim is to restart play with a contest for possession after an infringement or stoppage, almost like the old drop ball in football.

There are a long list of occasions when a ref will award a scrum but the most common include: knock-ons, offside in open play, an unplayable ruck or maul, or an injury stoppage.

The ref will mark the scrum zone and the middle line of the scrum, parallel to the goal lines.

If a team is not ready to form a scrum within 30 seconds of the mark, they will concede a free-kick. 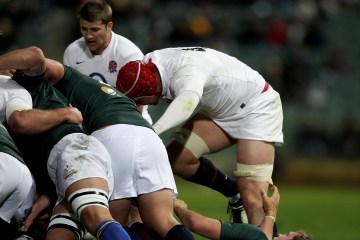 Eight from each team then bind, they must also have two props and one hooker in the front row and two locks in the second row, plus three back-row players.

When one team has less than 15 players, the number in the scrum can also be reduced.

However the opposing team is not obliged to make the same reduction.

But no team can have less than five involved.

Why does the referee say ‘bind, set’?

Props attach themselves to the hooker, who link with both arms.

Then the locks bind with the props and each other, all others must bind to a lock with at least one arm, or that team concedes a penalty.

The front rows stand at arm’s length, with the hookers at the mark.

Is taking part in a rugby scrum dangerous?

Many serious injuries have occurred from scrums both at an amateur and professional level.

But most fans find them one of the most exciting parts of the game.

The danger element means that a great number of offences are penalised, such as a front-row charging against the opposition, turning the scrum or pulling an opponent.

Players who are not part of the scrum must stay at least five metres behind the player at the back.

When does the ball get thrown into the scrum?

The scrum-half chooses which side to throw the ball in.

The ref resets the scrum if it comes out at either end of the tunnel or if it collapses.


What is a ruck in rugby union?

When does a scrum end?

It’s over when the ball comes out in any direction except the tunnel,
or gets to the feet of the furthest-back player.

Also if the No8 picks up the ball from the feet of a second-row player, or if it reaches the goal line.

Branded communities: Experts give their one piece of advice