I WOULDN’T begrudge anyone a private life.

But the booze-soaked antics of the Finnish Prime Minister were more akin to a teenager raving it up on Mykonos after their A-level results than a serious world leader.

In the past few days we have seen videos of married Sanna Marin slow-dancing with a hunky pop star and grinding against a mini-skirted model.

Perhaps most shockingly of all, was the leaked picture of topless women kissing in the bathroom of the Prime Minister’s official residence.

Now that’s what I call a Partygate.

The fun-loving PM was on the verge of tears on Wednesday as she defended herself, insisting that she is “also human” and complaining that “this week has not been easy”. 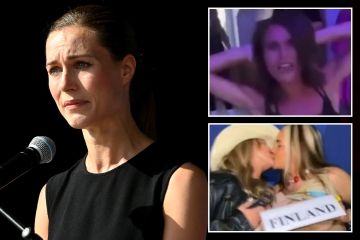 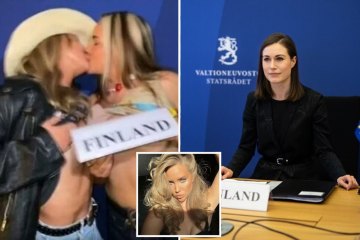 People all over the globe have rushed to defend the 36-year-old’s right to party.

A social media campaign of women posting their own dancing videos in sympathy with Sanna was even started.

Which is all very well, yet I can’t help but wonder what the implications would have been for our own Prime Minister. It’s not hard to remember the po-faced furore over Boris Johnson’s warm glass of wine in his garden.

There was palpable outrage over the soggy sausage rolls and sauvignon.

The reports of so-called “parties” mired his government in a seemingly unshakeable scandal, which eventually led to the PM being marched out of office by his own MPs.

Yes, I know that Boris was breaking his own rules at a time of lockdown.

But can you just imagine the public reaction if Boris had had two topless women in his toilet?

Sanna Marin’s exuberant partying reminds me of the Nineties It Girls.

The likes of Tara Palmer-Tomkinson and Amanda de Cadenet partied their way through a decade, drinking fizz and dancing on tables — often with disastrous results.

But the obvious difference is that being an It Girl was more or less their job.

They didn’t have to get up in the morning to run a country of 5.5million people.

And Sanna’s tenure as Prime Minister comes at a crucial time for her nation’s future.

POLITICS IS INCREASINGLY A WORLD OF SCRUTINY

Finland is on its way to Nato membership as the threat of Vladimir Putin looms large.

The country, which borders Russia, applied to be part of the military alliance in response to the invasion of Ukraine.

Finland also has the highest petrol prices of all EU countries as a result of the ongoing war.

To put it mildly, Sanna’s voters have rather a lot to be worried about at the moment.

And what may concern them most is her lack of judgment.

Her ragtag social circle of party-loving influencers and models is eyebrow-raising.

The truth is that politics is, increasingly, a world of scrutiny.

It’s also a world in which it is difficult for women to make their mark.

But, male or female, Sanna’s behaviour is hardly that of a role model, which we expect our public servants to be.

Maybe this “right to party” is something that leaders have to put on ice for the duration of their leadership.

Most periods of office only last for a few years.

And perhaps it’s a lifestyle that just isn’t compatible with being taken seriously as PM?

If Sanna is not careful, the party may soon be over.

NOW OLIVIA’S GETTING HER REVENGE IN STYLES

ACTRESS Olivia Wilde has described being served with custody papers by her ex Jason Sudeikis as “vicious”.

In fairness to the star, she was on stage at the time promoting her new thriller Don’t Worry Darling, at CinemaCon in Las Vegas in April.

She was on stage at the time promoting her new thriller Don’t Worry Darling, at CinemaCon in Las Vegas in April[/caption]

The whole ordeal must have been very embarrassing. But Olivia is more than getting her own back, with a promising directing career and a new relationship with teenagers’ heart-throb Harry Styles.

In a revealing interview with Variety magazine, she said she shared a “deep love” with the pop star who is ten years her junior.

As revenge goes, that must feel pretty sweet.

I LOVE the story of the pensioner who has become the oldest person in Britain to sit a GCSE exam – at the ripe old age of 92.

Derek Skipper sat his maths GCSE in May and passed with a grade five, the highest mark possible on the foundation paper that he took.

The proud grandad-of-three admitted he was “very, very pleased” with his results.

He said: “When I started out on the course in September, it was very low key and I didn’t tell anyone I was even doing it, as I thought if I don’t finish it then it’s embarrassing, so I kept very quiet until Christmas time.

“The results didn’t matter to me at all, I was just doing it for my own fun.”

That really is the right approach to learning and I love the fact that he has embraced it in his nineties. Good for him.

Turns out that you can teach an old dog new tricks after all.

WHEN it comes to bad behaviour on planes, we might perhaps expect a spot of drunken bother from a raucous hen party or stag group.

But the footage of an elderly woman slapping a Jet2 steward after he allegedly took her drink away from her is both surprising – and a bit depressing.

The woman, who looks to be in her seventies, allegedly became aggressive and hit the employee on the flight from Manchester to Rhodes – all because she wanted her gin and tonic back.

She was then escorted off the flight by police after the Jet2 pilots were forced to divert the plane to Munich.

Makes you proud to be British, doesn’t it?

A MAN who admitted throttling a woman he met on Tinder has become one of the first in the UK to be jailed under a new non-fatal strangulation law.

Before the new law existed, Benjamin Flatters, 32, may previously only have been charged with common assault. Now he has been given a 34-month sentence.

During the incident, Flatters put his hands on her throat and went on to throw the victim’s phone and damage her glasses.

The woman eventually managed to flee the house and asked a neighbour to ring 999.

It was obviously a terrifying ordeal.

And it would be an understatement to say that this new law, which was only introduced nationally on June 7, is long overdue.

It was primarily introduced to protect victims of domestic abuse.

On average, one woman in the UK is strangled to death by her partner every two weeks, according to Women’s Aid.

It is also often the cause of death in what is frequently described by their killers as the result of a “sex game gone wrong”.

Nearly a third of female murders in the UK were due to strangulation or suffocation in 2018 and numerous studies have shown that non-fatal strangulation is one of the highest markers for future homicide.

What took them so long to introduce this law?

PRINCE Harry rode to victory this week in a US charity polo tournament, winning praise for his “superstar” play.

But the skill on show wasn’t what caught my eye at the event in Colorado.

The pampered prince flew out of California on a £7.6million private jet but the plane was left idling on the tarmac for 30 minutes.

It only took off after two flunkies carrying his polo mallets and kit loaded his gear.

So much for being a man of the people.