AS America grapples with a crackdown on abortion and a looming financial crisis, more young men are turning to vasectomies – and filming it for TikTok.

Demand for vasectomies appears to have shot up dramatically in every corner of the US since the Supreme Court overturned Roe v. Wade in July, which guaranteed a woman the right to an abortion.

Keith Laue decided to get a vasectomy at 23[/caption]

For most people, getting “the snip” is a decision you make in later life.

It refers to male sterilisation and it cuts or seals the tubes that carry a man’s sperm to permanently prevent pregnancy.

Many men go for this option when they don’t want any more kids – as it’s 99 per cent effective.

But an increasingly turbulent post-Covid economy and a clampdown on women’s rights means a growing number of young men are turning to clinics for different reasons – and sharing their experience on TikTok. 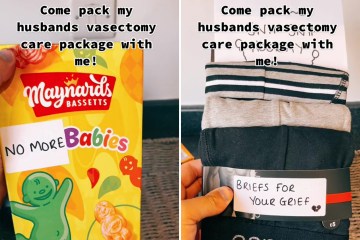 Woman divides the internet with vasectomy care package for her husband 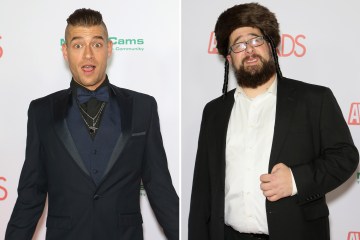 As well as men filming themselves having the op, videos from the last few months show women making thoughtful care packages for their partners while they recover.

Even on Tinder, mentions of “vasectomy” in dating profiles surged this year by more than five times compared to last year, a spokeswoman for the dating platform told The New York Times.

And demand for the procedure itself has skyrocketed, particularly in the US, with many medical staff overwhelmed and unprepared for the level of interest.

A doctor in Iowa who normally carries out 40 to 50 vasectomies each month was on track to do 100 in July after the Roe v. Wade decision.

“We have seen a dramatic increase in inquiries and contacts through our website and calls.”

In Alabama and Texas – two states that have brought in draconian abortion laws since the Supreme Court ruling – medics said there has been a “crazy” rise in vasectomy appointments and weekly calls have doubled.

Tim McAuliff, a Texas-based vasectomist, said: “We’ve had some people call and say because of Roe v. Wade they want to be more proactive or preventative.”

And it’s not just happening in states where new abortion laws have been introduced – doctors in New York said business has tripled since July.

Men without children are also enquiring about vasectomies as a method of contraception in the post-Roe world, while others are having the snip as more and more people make a conscious decision not to have kids.

With just one child, Keith Laue, 23, made the decision to have “the snip”.

He and his partner Taylor Ribar said they felt disempowered by laws which were being bought in, in their home state in Texas.

In the summer of 2021, the state banned abortions as early as the first six weeks of pregnancy.

The couple knew they didn’t want another child, and decided that a vasectomy would be the most cost effective option available to them.

He explained that the cost of contraception had been a roadblock for the couple, and said it shouldn’t just be his partner’s responsibility to take care of birth control.

He told Health: “It felt like almost immediately afterward, maybe two or three weeks later, Roe was overturned. And I was even more glad I did it.

“I don’t have anymore anxiety now around having a healthy sex life, and that’s a really nice feeling.”

And now Keith is sharing his journey on TikTok in order to help other men who might be considering the procedure.

He added: “I’m really thankful for the traction my video has gotten. But I don’t think it’s fair that it took overturning a woman’s reproductive rights for this subject to get attention.”

The full-time TikTok influencer said vasectomies aren’t talked about very much when it comes to the conversation on contraceptives and birth control – and he wants to change that.

Another man, Mike Pridgen, a 28-year-old comedian from New Jersey, filmed his surgery and popped it on TikTok.

He even caught the moment a doctor made the “little pinch”.

He said: “That’s not nearly as bad as I thought it was going to be.”

The video has been viewed millions of times and the response has been overwhelmingly positive.

Mike’s decision was wrapped in his choice not to have kids – for both financial and person reasons.

He said: “It is damn near impossible to raise a child, financially, in this country at this point. It’s also not particularly safe.

“Every day, you turn on the news, it feels as though this country is burning. So why would I want to bring a child into this?”

Like Keith, he aims to educate his followers about vasectomies and promote them as an alternative to other forms of birth control.

Iowa-based Dr Esgar Guarínsaid said his latest wave of patients are men in their 30s who don’t want children as attitudes change and now they feel an urgent push to get snipped.

He said: “At least men are waking up in our country and saying this is something we can do. That’s very nice.

“The problem to me is that it took restricting the right of an individual to be able to make decisions about her own body for men to start waking up.

“Men need to be more aware of their participation in reproductive health, because if we don’t do that, we aren’t going to change the behavior.”

While less than two percent of unmarried men currently rely on vasectomy for contraception, it appears the trend could be changing as men decide to take more of a role in family planning.

How does the procedure work?

Surprisingly, the life-changing operation can be carried out in just 15 minutes.

The procedure is typically carried out under local anaesthetic, so is often relatively painless.

There are two ways to carry out a vasectomy, using the conventional or the no-scalpel method.

This allows the surgeon to remove a small section from the tubes linking the testicles and the penis, which are then tied or sealed shut.

Medical professionals often use dissolvable stitches to close the incision.

The second method is no-scalpel vasectomy, which is typically carried out under local anaesthetic.

During the operation, surgeons puncture a small hole in the skin of the scrotum, which allows them to access the same tubes without using a scalpel.

After the passage is closed, the puncture is closed in the same way as a conventional vasectomy.

Patients that have had the sterilisation surgery are often able to return to work one or two days after getting it done.

COULD we be more wrong? Millions still mistakenly believe that when you are stung by a jellyfish you should wee on the welt. They have been fooled by 1990s sitcom Friends...