EDDIE JONES lost his rag with an Australian heckler after leading England to a 21-17 win in Sydney.

The Aussie Red Rose boss was walking around the pitch when he heard a fan cry out: “You’re a traitor.”

Jones, 62, tried to confront the fan – being held back by a steward.

As Jones was held back, the security guard warned the fan: “I’ve talked to you before.”

The guard also gestured at the heckler to walk away. 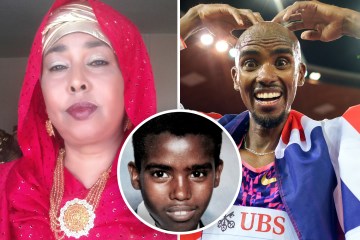 After the game, Jones told the Sun Herald: “Clowns think they have full go to abuse coaches.”

One fan on Twitter wrote: “Didn’t expect to cop it back. If you wanna act tough and sledge him at least back it up.”

A third pointed out: “Does he understand we are being coached by a Kiwi?”

Burnie-born Jones coached the Australian national team between 2001 and 2005.

He was relieved of his duties after a run of eight defeats in nine matches.

Jones later went on to coach Japan between 2012 and 2015, before taking the England job.

After England’s previous 25-17 win in the second test, Jones admitted that he enjoyed getting one over the country of his birth.

He said: “You have got 48,000 people all full of drink and all they want to see is their team win. When you turn them away, it is a great experience. A great feeling.

“Before the game they are coming up saying to me: ‘You are going to get belted tonight.’ Now they are a little bit more quiet. So that’s good. I enjoy that.”

I’m nursery staff, this is what I mean when your kid was ‘exploring the room’

Following their latest victory that sealed the Ella-Mobbs Trophy, skipper Courtney Lawes said: “We saw plenty of stuff in the press about what some of their players were saying, some people targeting Gengey (Ellis Genge), some people calling us ‘Poms’ and what not,.

“It’s all fuel for our tank. Any good team uses that as motivation.”