WITH the spectacular pageantry and ­intricate ceremony for which our ancient country has no equal, the Queen has been laid in state.

It was flawless, precise and magnificent.

The Bearer Party from Queen’s Company, 1st Battalion Grenadier Guards, place the coffin of Queen Elizabeth II on the catafalque at Westminster Hall[/caption]

For an hour the centre of our capital came to a hushed standstill.

Hundreds of thousands, of all ages, packed the route a dozen deep in places.

There were tears as our lost monarch, her coffin atop a gun carriage, emerged for the last time from the Palace.

Behind walked her children, including the King, grief still etched on their faces.

Read More On The Queen's Death 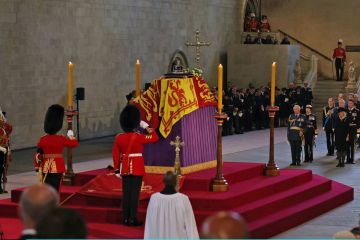 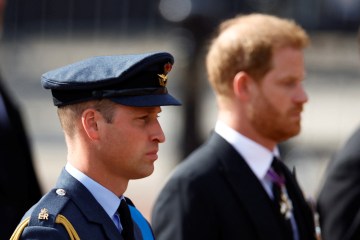 Then William and Harry, differences paused, marching slowly side by side.

Their wives followed in separate cars.

Along the Mall the procession passed, to the funeral strains of the Scots Guards and Grenadier Guards bands.

At Horse Guards’ Parade the crowd burst into applause.


Queen always kept calm and carried on for 70 years. We couldn’t for a weekend


The Crown was everything Irish Republicans loathed – but Queen found harmony


Was William's invitation to Harry really an olive branch? Or PR masterstroke…

Then it was on to Whitehall and to Westminster Hall, where young guardsmen lifted Her Majesty’s coffin on to the catafalque.

The sadness of the Royal Family, and the public, was overwhelming.

So was the love from so many people towards our greatest monarch in 1,000 years.

So was the sheer splendour of it all.

Republicans can sneer all they like at such pomp.

How drab our country would be if they ever got their way.

From the moment of Her Majesty’s death, Britain has been at its traditional best.

Meticulous arrangements planned long ago have been enacted to perfection, from Balmoral to Edinburgh to London.

But we do have one caveat — on top of some slightly heavy-handed policing towards adolescent protesters.

We worry the depth of affection for the Queen, and the numbers who will descend on the capital to honour her, may be greater than current plans allow for.

Mourners now face a ten-mile queue to see her coffin.

It’s no one’s fault, but many will fail.

Those who miss out may not have much more luck on Monday.

The State funeral will be on an unprecedented scale.

Vast numbers will fly in, joining millions of Brits packing the capital.

Although the route was established long in advance, is there not a case for extending it in London and Windsor?

Paying our respects in person should not be the sole preserve of those lucky enough to grab a place.

A longer route would give hundreds of thousands more a chance to see the Queen’s coffin pass.

Why not consider it?