Scans confirmed Tupaea suffered a ruptured MCL and partially torn ACL as a result of the tackle, according to Rugby Pass.

Look away now if you're squeamish!

He is now set to spend the rest of the year on the sidelines.

Swain meanwhile has since been cited for the shocking challenge during yesterday’s game in Melbourne.

He will face a hearing on Monday and could receive a lengthy ban for the challenge.

But on the pitch the Aussie lock was only sent to the sin bin for 10 minutes for the shocking incident. 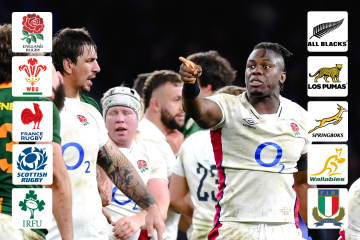 Sign up to our new weekly betting newsletter for tips, free bets and price boosts

Swain’s moment of madness came five minutes before the break, and shortly after he came on as a substitute in the thrilling 39-37 defeat to the All-Blacks.

Launching himself in at the breakdown, the 25-year-old grabbed Tupaea’s leg from underneath, before falling on top of it with his entire bodyweight.

Tupaea hobbled off the field with the help of two medics after coming on as a substitute himself, with it now confirmed the New Zealand star will be out for months.

Fans were left in shock that Swain was not sent off for the tackle.

Former Scotland international Jim Hamilton uploaded footage of the incident and fumed: “I don’t normally post s*** like this but this young lad needs to check himself.”

England cricketer Sam Billings replied to him: “Surely a red?”

While another fan wrote: “100% intentional. Should have been a red.”

And a fourth claimed: “Absolute filth… should [have] been a red.”

Referee Raynal told Swain as he showed him a yellow card: “That is your responsibility to not put yourself in a reckless position which can seriously injure the player.

“You cannot target the lower legs, it’s dangerous so it’s a yellow card.”

While World Rugby’s law book says: “A player may lever the jackler out of the contest at the ruck but must not drop their weight onto them or target the lower limbs.”

Given those rules, fans have been left in awe as to how Swain was not shown a red card.

The Wallabies forward was not so lucky in the first Test against England back in July.

Inside Wills & Harry’s ‘uncomfortable’ week with ‘no meaningful reconciliation’

On that occasions Swain was shown a red card for HEADBUTTING England ace Jonny Hill.

He was cited and handed a two week ban, but could face a lengthier suspension after this latest breach of discipline.

Professor of Marketing at Henley: 'Combine disciplined thinking with creativity'