FORMER Chelsea owner Roman Abramovich played a key role in getting five British prisoners of the war in Ukraine freed.

The Russian, 55, welcomed John Harding, Shaun Pinner, Aiden Aslin, Dylan Healy and Andrew Hill on to a jet flying them from Russia to Saudi Arabia.

He then handed them iPhones so they could tell loved ones they were heading home.

And he chatted football with West Ham fan Shaun, 48.

Stunned dad-of-two John, 59, said: “He’s a legend. We absolutely love him and I’m so grateful for his efforts.”

West Ham fan Shaun approached the Russian oligarch and ex-Chelsea owner as he tried to make sure Shaun and four other PoWs were comfortable on the plane.

READ MORE ON THE UKRAINE WAR

John Harding said: “I didn’t even notice but Shaun said it looked like him.

“He went over to him on the plane and asked where he was from and Roman said ‘London’.

“Then Shaun said, ‘You really look like Roman Abramovich’ and he replied, ‘That’s because I am him, sir’. He couldn’t believe it.

“I joked that Shaun is a West Ham fan and we all laughed.”

Abramovich, 55, is said to have played a key role in Wednesday’s release of John, Shaun, Aiden Aslin, 28, Dylan Healy, 22, and Andrew Hill, who had spent months in brutal captivity.

The men went from cramped cells, regular beatings and stale bread to being “treated like royalty” in the leather-seated jet cabin.

Abramovich handed each of the men an iPhone 13 so they could call their families and let them know they were heading home.

And he talked football with the Brits as they tucked into steak, canapes and tiramisu on the flight from Russia to Riyadh.

Dad-of-two John added: “Shaun was chatting away to him about football for a long time and I was speaking to his assistant.

“She said Roman had played a key part in getting us back. It’s quite extraordinary to think he was involved — and I wouldn’t have even been able to tell you who he was by looking at him.

“He’s well respected by Ukrainians and massively by us now, too — he’s done a hell of a lot for us and we couldn’t thank him enough.

“He was a sound bloke, a really lovely guy. He’s a legend — we absolutely love him and I’m so grateful for his efforts.”

Abramovich is said to have tried to play peacemaker when his ­former pal Vladimir Putin ordered his Russian troops to invade Ukraine in February.

He was sanctioned by Britain and was eventually forced to sell Chelsea, the club he bought in 2003.

But he is understood to have played a key role, along with Saudi Crown Prince Mohammed bin Salman, in negotiating the prisoner exchange that saw the four fighters and one aid worker released.

John had been serving in Ukraine as a medic with the 2nd Battalion of the Azov Regiment.

He surrendered and was taken prisoner in May after his unit ran out of ammo while in the Azovstal Steelworks in the besieged port of Mariupol in Eastern Ukraine.

John was thrown on a bus and kept on it for three days feeding off biscuits and dirty water while his jail was prepared.

Ex-care worker Aiden was captured fighting for the Ukrainian armed forces during the brutal battle for the Azovstal steel plant in the city of Mariupol, in April[/caption]

He said he was held in a total of three jails, including one he dubbed “The Dark Side”, in Russian-held Donetsk, where he was repeatedly battered by guards from the region’s police force.

In the worst beating, a group of guards cackled as they strapped a carrier bag over his head, cuffed his hands behind his back and unleashed a 30-minute pummelling.

They punched, kicked and jumped on his body, breaking most his ribs and leaving him passing blood when urinating.

He was also charged and convicted by a ­kangaroo court of war crimes, and faced a minimum of 20 years in prison.

With tears streaming down his face, John said: “I thought, ‘I just wish they’d f***ing kill me now’.

“That was the worst moment — the way they treated us was appalling. In my head I just told myself, ‘I’ve been hit harder by my sister’. If I’d have known how we’d be treated before we surrendered, I would’ve stayed and set up a sniper’s nest and just tried to take a few of them out before I got killed.

“The other prisoners and I kept our spirits up by having a laugh with each other through our cells.

“We’d joke about how we liked our steak cooked since we were eating only bread.”

He also told how his Russian tormentors laughed when they told them the Queen had died.

But on Tuesday the prisoners were told to gather their belongings. They had bags put over their heads with tape wrapped round, their hands were cuffed and they were slung in the back of a truck.

They drove for eight hours, picking up around 30 other foreigners, before being bundled into another vehicle and driven for another 12 hours without a toilet break.

They were released at a Russian airport where they were met by Saudis who escorted them on to the plane to Riyadh, along with five other foreigners, a group of bodyguards and a crew of three.

Shaun, who had faced the death sentence, has returned to his family’s home in Potton, Beds[/caption]

Shaun is reunited with his mum and sister[/caption]

They could not believe their eyes when they saw inside the jet.

The plane had spacious seating areas and a kitchen section, which served them a tasty beef dish with rice, a shawarma plus sponge and cream pudding.

John said: “It was the best meal I’d eaten in seven months. It was worlds away from the misery we’d been through. It was incredible.”

The freed PoWs were checked by medics in Riyadh before boarding a BA flight to Heathrow, which landed at 6.30am yesterday, when they were reunited with loved ones

John, met by sister Denise, 63, went back to her flat in Luton, Beds. He said: “I had my first proper shower in seven months at the hotel and it was the best shower I’ve ever had.

“There were tears when we met and it was very emotional. We met the other families too, which was special after what we’d all been through.”

Shaun, who had faced the death sentence, went back to his family’s home in Potton, Beds. Stepdad Lyndon Price 63, said: “He will be tucking into a steak with a glass of red wine. That will be his first meal. He’s had a few beers and I’ve given him a shave.

“It’s been a difficult time for him and traumatising. There’s some pretty gruesome details.

“But he’s so pleased to be home. He’s FaceTimed his wife Larysa, who is in Ukraine, and we are hoping to get her over.”

Meanwhile, the mother of diabetic Brit aid worker Paul Urey, 45, who died needing insulin while in captivity in July, said yesterday: “I’ve heard the news and I’m happy for those involved.

“However, I’m devastated that my son is not one of them.” 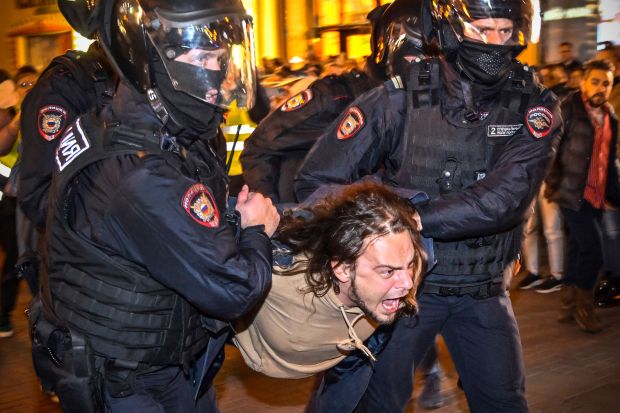 DRAFT dodgers fled Russia yesterday as the Kremlin tried to quash reports it was calling up a million men — and anti-war demos erupted in 38 cities.

Riot police arrested more than 1,300 people including over 500 in Moscow and 500 in St Petersburg.

Defence minister Sergei Shoigu said 300,000 would be called up — but exiled investigators claimed a secret clause in Putin’s decree put the upper limit at a million. Putin spokesman Dmitry Peskov called that a lie, and said the exodus was exaggerated.

But dozens of flights out of Moscow sold out within hours.

And one man who flew to Armenia said: “I don’t want to die in this senseless war.”

Peskov’s son Nikolay was the victim of pranksters posing as military officers who called to demand he report to a recruiting base. He refused to go.