Hermann Yonga nicknamed YGA (a shortcut for his Family name YONGA) age 35 was born in Cameroon Yaounde West Africa. Growing up he was passionate about drawing, longed for moving to America and live the American dream.

In 1996 at the age of 9 his mum found him drawing their home garden using his dad Ink pen, she was so amazed by how beautiful that drawing looked and realized how skilled her son was, so she started to foster his talent and nurture his passion for it. He regularly will go sit under their mango tree located in front of the house, where he’ll spend half a day doing his homework as well as amazing drawings, He said ‘’that tree was my source of inspiration, it brought me peace, happiness and that’s where I found my true self and also the starting point of a long journey’’.

Although Hermann was adept at drawing, he was also incredibly good at dance, music, act performing and pursued his music and acting career where he had the privilege to meet Hip Hop Stars such as Snoop Dogg, 50cent, P diddy and many more celebrities in the US and Russia where he resided years later and was lucky to perform as their warmup artist, thanks to his former manager Billy Green. 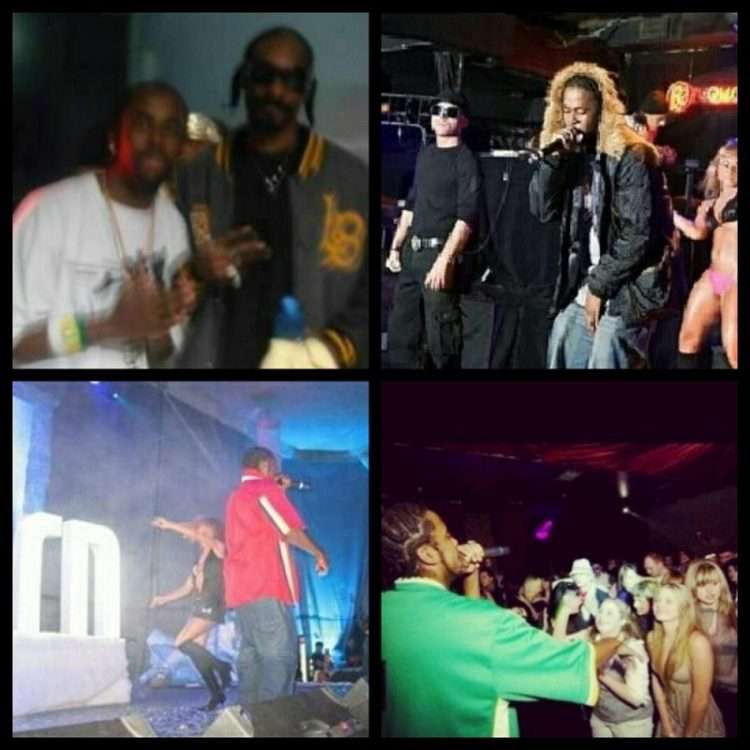 During his music career, Hermann was always seen styled in a unique way at his concerts, red carpet events, or club parties, his taste for the eccentric look, extravagant outfits, and blin-blin would always draw attention and that resulted in a nickname ‘’the king of swag’’ given to him in his mid-20s. Although He took interest in styling Hermann hadn’t shown signs of becoming a fashion designer.

In 2013 Hermann moved to London UK to study Business Management at London School of Business and Finances (LSBF). He still pursued his music and acting career which amazingly landed him not only on ITV judge Rinder Show with his now long-time friend Daniel Ndlara Robson (a movie producer from Southeast London) ; a Lead role on popular afrobeat artists Fuse ODG and Sarkody music video titled “down on one” with millions views on YouTube ; but also Hermann had the privilege to star in a Big afro-international series called ‘’Jennifer in London’’ with a his co-star Jennifer Akindele, a famous Nigerian actress.

2 years later he met a streetwear clothing owner Daniel Dabati who asked him while he was performing his new release song ‘’ weekend’’ in the club to join his team and that became the turning point in Hermann fashion’s career. In 2015 Hermann was given different roles within the company, he initially modelled for the brand, gained experience and only few months later, Daniel who he became friends with realized that Hermann had drawings and natural creative skills then he promptly gave him the opportunity to design for the company and Hermann played a major role now for the brand and took interest in fashion.

BUILDING HIS OWN BRAND

A year later, Hermann gained more experience working with Dabati someone he dubbed ‘’my mentor’’ but their disagreement on the brand vision culminated to Hermann departure from the company and his ambitions to build his own brand. Hermann had new dreams, news goals which seeing a celebrity such as Beyonce, 50cent in his clothes on the red carpet one day was one of them, Hermann decided not only to design clothes but to actually handmake them, so he moved to the East midland (Loughborough town) where he met the love of his life Farai Tawamba a Leicestershire based from Zimbabwe who became years later his fiancée and mother of their 2 daughters Hollywood (4years old) and Tokyo Yonga (2years old). He shared his dreams and ambitions in the fashion world, subsequently she bought him his first sewing machine as a birthday gift, helped find a sewing tutor named Mrs. Joy and she gave Hermann a 4months private sewing lessons. 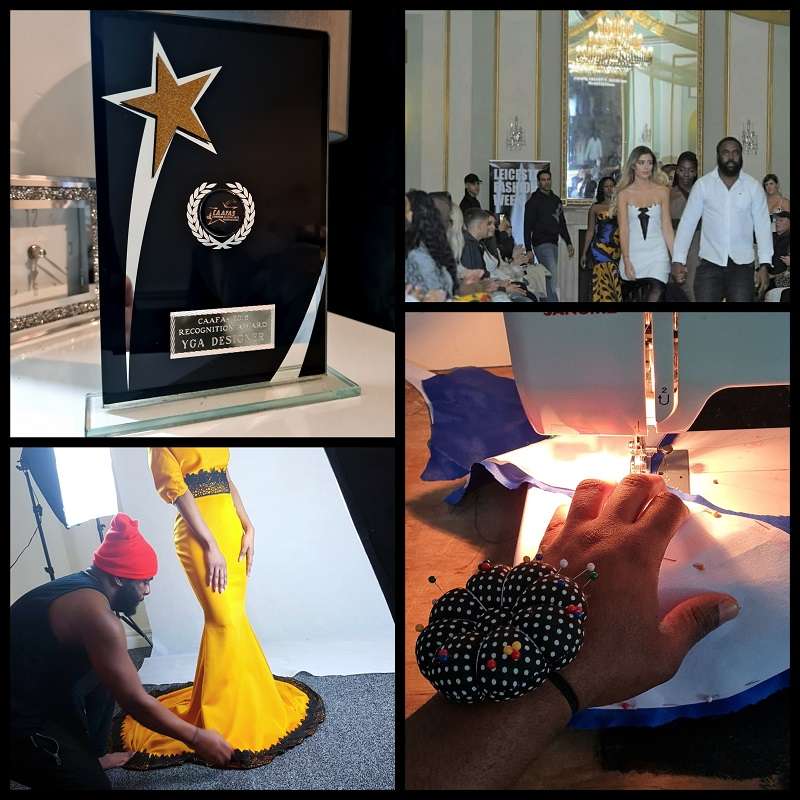 In 2018 Hermann became a dressmaker and launched his now previous mass bespoke brand YGAclothinguk that year, he started sewing and repairing clothes for his local community, doing photoshoots with models and had the opportunity to showcase his collection at Leicester fashion week from which he gained exposure, built a massive audience of 8k followers on IG, also acquired new customers from the show who hired him to make their special occasion outfits few months later. Subsequently to Leicester Fashion week Hermann was nominated at a luxurious Movie, Fashion Art Award event organized by CAAFAS in London O2 inter-continental Hotel then was given that night a Fashion Designer Award for his passion and commitment for excellence.

At his early entrepreneurial stage growing YGAclothinguk Hermann wasn’t knowledgeable enough about building a successful and reputable brand on his own with the help of few friends, although he had couple of loyal customers, Hermann realized that his fledgling mass bespoke brand wasn’t giving him purpose, he had no sales goals, no sense of direction, no foundation, no story and he was naively concentrating on being a product designer but neglected the focus on the business side of it. During COVID YGAclothinguk operations started to fizzle out, he decided to look for a full-time job in order to sustain his family living costs and was giving less attention to his brand in the meantime thinking of restarting from point zero.

Early 2022 Hermann Yonga nicknamed YGA finally decided to reinvent his brand and opted for upmarket this time, he took the risk to quit in job in January, used his savings to rebuild something meaningful and HOUSEOFYGA was born.

During the transition from mass market to upmarket Hermann was aiming at creating a storytelling brand that not only embodies his heritage, journey, personality, his past influential events that helped shape his vision and contribution to the fashion world but also put diversity and inclusion at the forefront.

Lacking business acumen, Hermann began to refine and educate himself, from attending

mentorship events, business classes and webinars to reading books about luxury fashion, Major brands Stories he aspires to be, he was committed to attend networking events every month and built new contacts.

Hermann now was on the right path, gaining business knowledge which helped him build a solid foundation of his eponymous Luxury brand HOUSEOFYGA.

HOUSEOFYGA is a luxury ethical brand established in 2022 that provides bespoke tailoring services with attention to details, high quality fabrics for high end customers with sizing problems and those who value exclusive designs, minimalism and self-expression. They focus on individuality not the mass.

The brand also produces premium and occasionally limited edition ready to measure pieces which are ethically reproduced on customers’ demands and can be personalized to their unique styles and sizing such as hoodies, t-shirts and denim jeans.

MISSION STATEMENT: To give customers what they want, by ethically handmaking quality, timeless and durable pieces that’ll help them express their individuality.

GOAL: to focus on individuality not the mass.

REASONS BEHIND HIS HAUTE STREETWEAR BRAND: MIX OF COUTURE AND STREETWEAR

Although couture is their main focus, creative director and founder YGA was influenced by hip hop celebrity lifestyle, how they are treated special, and all the attention given to them which is why he wanted to create a brand where couture meets streetwear and place his logo on a garment which can be recognizable from far. He said ‘’my Logo is my story, my identity, my heritage and there wouldn’t have been anything better than a hoodie or t-shirt to display that on’’ 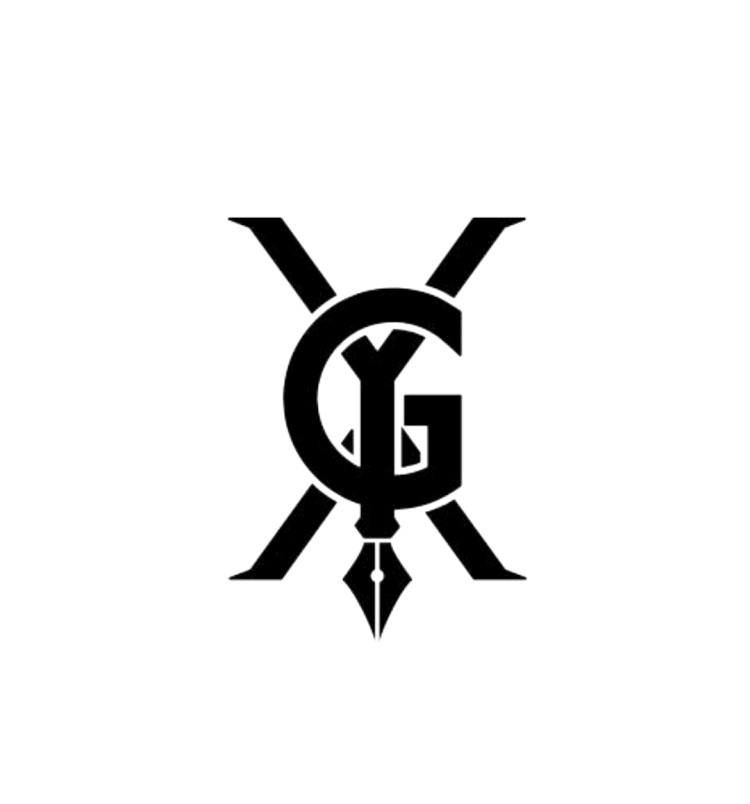 The YGA logo monogram is an interlocked Y,G,A letters which are a shortcut of his family name YONGA and the ink symbol at the bottom of Y letter is reminiscent of 1996 the date his mum found him drawing their home garden with his dad ink pen and that became a turning point of his life. 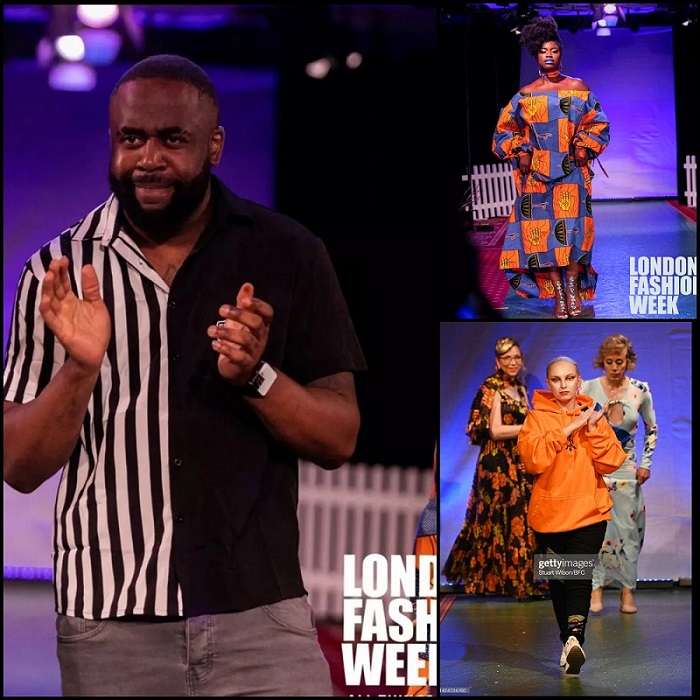 A month ahead of London Fashion Week, I was contacted by Diana the CEO of ALL THINGS FASHION (ATF) through Katie’s friend a transgender I met at a business networking event and in my surprise, I was offered to showcase my new collection at London Fashion Week scheduled under ATF, I shook!! This was SURREAL!! The reason I was a fit candidate is ATF celebrates diversity and inclusion, so we shared the same values and Diana told me she seen my designs on my LinkedIn profile already prior to reaching out and she loved it. Once we announced that I was doing my first major debut runway and launching my new collection I dubbed ‘’GOD DID’’ at London Fashion week, everyone was shocked and very proud at the same time, sharing our post with their friends and followers and that culminated to gaining thousands of news followers on IG as everyone couldn’t wait to see my SS23 collection on the 2nd biggest fashion show in the world.

A day ahead of LFW, we had a Teams-meeting with Diana and her team, she suggested I should make an optional dress a ‘’kaftan’’ for a plus size model called victory because she was the star of my collection.

Diana was very kind to me, and her encouragement and support fueled me to build a new dress that night before my trip to London on the next day. Although I usually take weeks to design and build a dress, this time I felt like it was my only chance to be discovered by the world and make a mark. I started at 9pm and finished it at 9.30am in the morning then took my train to London at 10AM, it was vibrant color African print puffy arms, knots details on wrists, open shoulders and long tail kaftan dress. We attracted lots of press (Media) attention because I was the only designer who brought diverse models on the runway including Katie a transgender, I met previously at a networking event and This Kaftan star-outfit became 1 of the most coveted and talked about at London Fashion Week.

YGA said ‘’ I could never in my wildest dream have imagined quitting my job early this year to reinvent HOUSEOFYGA for 6 months would land me at London Fashion week, it was a good risk-taking decision, and I had the best experience in my fashion career so far.

I know there’s more to come, all thanks to GOD ’’

Subscribe to their website www.houseofyga.com for upcoming full collection drop and be the first one to be notified.

Two players died due to sudden electrocution in a football match