The PM is facing a battle for survival after sacking pal Kwasi Kwarteng as her Chancellor last week.

But her supporters say her removal would lead to a national poll and an election drubbing ­similar to that of 1997.

The Tories have suffered disastrously in the polls since the mini Budget spooked markets and the threat of higher mortgage rates hung over the public.

Labour surged to a 33 point lead — its biggest for 24 years — in a YouGov poll in the aftermath of the growth plan.

Polling expert Sir John Curtice has said the party is now in a worse position than John Major’s government after Black Wednesday. 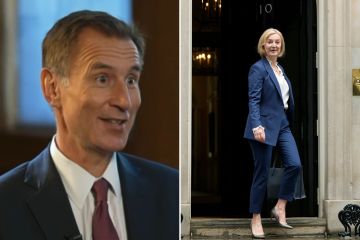 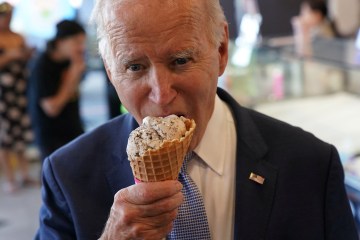 The swing against the Tories was around seven and a half points after the crisis in 1992 — leading to a 179-seat majority for Labour five years later.

But in recent weeks, the swing has been even greater — at nine per cent.

Yesterday, the PM was locked away holding crisis talks with her new Chancellor Jeremy Hunt at Chequers as one ex-minister declared “the game is up”.

But supporters of Defence Secretary Ben Wallace and former Chancellor Rishi Sunak are actively pushing for them to be given the keys to No10 following the mini Budget fall-out.

STRICT TO THE RULES

A senior Conservative said: “The whole Conservative Party owes it to the British people to focus entirely on them and their needs.

“It is time the plotters thought about who they work for — it is the British people.

“Those plotting against the Government clearly do not have any regard for our economic prosperity or the fate of the markets.

“The plotters will not get a coronation.

“Those wanting a People’s Vote-style rerun of the summer contest will simply bring about an early general election.”

They have agreed to meet regularly in future with the PM’s “Trussonomics” vision now dead in the water.

A source close to Ms Truss said: “The PM will host a reception for the Cabinet at No10 on Monday evening to continue to get their input into the Medium Term Fiscal Plan.”

Mr Hunt will host roundtables in the coming days with all Tory MPs to hear their views on areas for growth such as immigration and planning reforms.

He told the BBC’s Sunday With Laura Kuenssberg programme that the PM remains “in charge” despite colleagues demanding she is forced out and her trailing heavily in the opinion polls.

The Chancellor, set to delay a penny cut to income tax following reversals on the 45p top rate of tax and corporation tax, said: “I’m not taking anything off the table.

“I want to keep as many of those tax cuts as I possibly can because our long-term health depends on being a low-tax economy — and I very strongly believe that.”

Mr Hunt strongly hinted Whitehall departments would have to find savings, which could mean rowing back on the pledge to spend three per cent of national income on defence.

He said: “We’re going to have to take some very difficult decisions both on spending and on tax.

“Spending is not going to increase by as much as ­people hoped.

Taxes are not going to go down as quickly as people thought — and some taxes are going to go up.”

Yesterday, Tory MP Robert Halfon launched an extraordinary attack on the Government and its philosophy around the mini Budget — despite publicly backing its key measures at the time.

He said: “I worry that, over the past few weeks, the Government has looked like libertarian jihadists and treated the whole country as kind of laboratory mice on which to carry out ultra, ultra free market experiments.”

But ex-minister Crispin Blunt became the first Tory to publicly say the “game is up” for Ms Truss.

He told Channel 4’s The Andrew Neil Show: “I think the game is up and it’s now a question as to how the succession is managed.”

Fellow Tory Andrew Bridgen added his name to the list, saying: “We cannot carry on like this.

“Our country, its people and our party deserve better.”

In a letter, he said that she “no longer holds the confidence of the country”.

Former Chancellor George Osborne was asked whether she could survive and said: “Probably not.

“She is PINO — Prime Minister In Name Only — at the moment.”

Several senior Tories are being urged to put themselves forward as a replacement including Ben Wallace, Rishi Sunak and Penny Mordaunt.

Allies of Mr Wallace last night said: “He is not going to move against her. But he stands ready if the party call for it.”

Ex-Culture Secretary Nadine Dorries said MPs should give Ms Truss a chance — but if they insist on removing her, they must bring back Boris Johnson, who has a mandate from the 2019 election.

A small group of plotters will meet for dinner tonight to discuss how they proceed.

Sir Graham Brady, chair of the 1922 committee of backbench Tory MPs, could be forced to ask the PM to stand down if he receives an overwhelming number of no confidence letters.

Labour leader Sir Keir Starmer last night demanded the PM come to the Commons today and give a statement after her eight-minute press conference on Friday failed to answer the public’s questions.

He said: “The ­Conservative Government is ­currently the biggest threat to the security and the finances of ­families across the country.

“That’s why the Prime Minister must come to Parliament on Monday, to explain what she plans to do to turn the situation around.”

The call comes as a new Institute for Government report warned Mr Hunt there is very little “fat” to cut as a projected increase in ­budgets has fallen due to inflation and increased pay awards.

MATT Hancock says Liz Truss needs to put some new faces in her top team if she wants to survive as Prime Minister.

The former Health Secretary says the Conservative leader needs to include all different wings of the party in her Cabinet — but he stopped short of calling for her to resign.

He said: “She needs the broad Conservative Party in her Government. She needs a reshuffle.

“She took the decision, which was respectable but high-risk, to only put the people in the Cabinet who have voted for her — and that means that’s only a third of the Conservative Party in Parliament.

“There’s a huge amount of talent on the backbenches. I’m not talking about me, but there are many others that should be brought into Government.”

When asked whether he thought there should be a leadership contest, he said: “I don’t think we’re there yet.”