LEGENDARY England star Jason Robinson has hailed Eddie Jones’ team of leaders ahead of the 2023 World Cup in France.

There is less than 11 months to go until the Red Roses kick off their campaign against Argentina in Marseille.

Pool games against Japan, Chile and Samoa follow, in what is a favourable draw for Jones and Co.

Progression to the knockouts is sure to bring sterner tests, where the need for leaders is even more crucial.

And Robinson, 48, who won the World Cup in 2003, believes having a team packed full of leaders is vital to success in France next year.

Speaking with Farah menswear, the off-field clothing partner of the Jamaican Rugby League World Cup team, Robinson told SunSport: “I think the good thing about England now is they’ve got quite a few leaders. 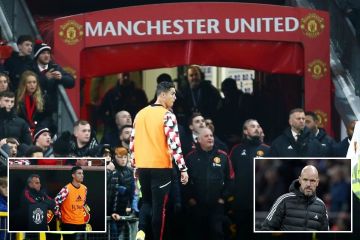 PartyCasino offer: How to claim an incredible 120 FREE SPINS on Starburst

“Obviously Owen Farrell has been a key leader for England for quite some time now.

“Courtney has done a great job when he’s come in so they’ve got that option as well.”

Courtney Lawes filled in for the injured Owen Farrell during the Six Nations, and kept the role when Farrell returned in Australia despite the vast amount of experience in the side.

Both men are in Jones’ 36-player squad for the autumn internationals, which also includes six uncapped players.


Karius' exes, from MIC star to fitness model, as he dates Diletta Leotta


Hatton stuns fans with weight loss.. but everyone's talking about his jeans

And Robinson is encouraged by the number of players in Jones’ squad that are bursting with leadership nous, something key to a World Cup challenge.

He continued: “Ellis Genge has done a fantastic job last year for Leicester and just seems like he’s maturing all the time.

“So I think they’ve got quite a few people that they could pull on if need be, which is key because we’ve said quite often [that] England need quite a few leaders in the team.

“And it seems like they’ve got that at this moment in time.”

Before the World Cup there is the small matter of autumn internationals against Argentina, Japan, New Zealand and South Africa, followed by a Six Nations campaign in the New Year.

Jones’ side go into the autumn fixtures off the back of an impressive 2-1 series win in Australia, but finished a lowly fifth in the Six Nations.

But whether England are genuine contenders for next year’s World Cup is currently hard to gauge.

*Farah menswear has been entwined with Jamaican culture since the 1970s and has continued that tradition, as the official off-field clothing partner for the Jamaican Rugby League World Cup team.

Ellis Genge has the experience of being a captain[/caption]