PEELING potatoes can be a time consuming process.

And with Christmas just around the corner, people are already thinking about how much time to set aside to prep ahead of their festive feasts.

She first made a cut around the centre of the potato, round the middle[/caption]

After boiling the potato, she holds each end with her fingers and pulls apart[/caption]

But thanks to one woman’s hack, you won’t need to spend as long getting your potatoes ready to roast.

“Did you know this tip?” Nicole Jaques said in her TikTok video.

Instead of faffing around peeling the potato, all you need to do is make a cut in it all round the middle. 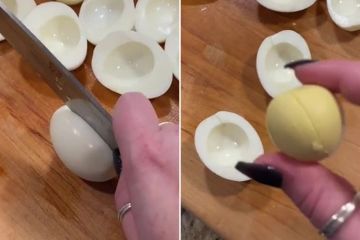 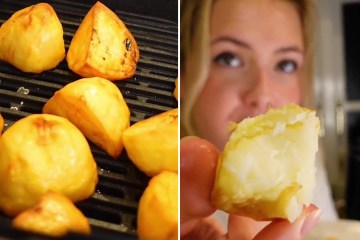 Then, boil the potato as normal.

Once it’s done, you can “take your fingers, put them on each side and pull”.

In doing so, the skin comes right off the potato – quickly and easily.

“It’s the most amazing, time-saving hack I’ve found in a long time, and I had to share it with you,” Nicole concluded.


I'm covered in tattoos & inked my eyes, people are stunned at my before pics

“Did you know this one? SAVE IT RIGHT NOW to use during holiday meal prep time,” she added in her caption.

People quickly took to the comments section to weigh in on the hack, with one writing: “I am so trying that next week.”

“Thank you for this amazing hack,” another added.

Thanksgiving is on 24th November.

I’m covered in tattoos & inked my eyes, people are stunned at my before pics

MANY OF us will be in a cocktail bar or pub this weekend. But have you ever wondered why the cocktail spoon bartenders use has a twisted handle? TikTok/@likeablecocktailsA bartender has...