THE cost of living may have skyrocketed recently – but that shouldn’t mean we have to miss out on our favourite Nando’s and Wagamama dishes!

Many supermarkets – including Sainsbury’s and Aldi – stock ingredients that make it incredibly easy to make restaurant-quality food at home, and they’re also really cheap.

She even made a Pizza Hut Margherita (badly) for £2[/caption]

With research by Tesco revealing that more people are “shopping around” different stores for the best grocery prices, I searched the high street for the cheapest ingredients on the market to cook a Pizza Hut-style Margherita pizza, and other dishes at home.

While some were easier to recreate than others, I gave it a good go – and saved almost £50 in the process…

I made Wagamama’s Chicken Katsu Curry for £3.40[/caption]

Wagamama’s Chicken Katsu Curry is one of the UK’s most beloved dishes – but it’s quite pricey at £11.25.

However, Sainsbury’s has brought out an Inspired to Cook range, which includes Katsu Curry paste and Panko breadcrumbs to go on the chicken, making it so much easier to cook at home – and saving me £7.85. 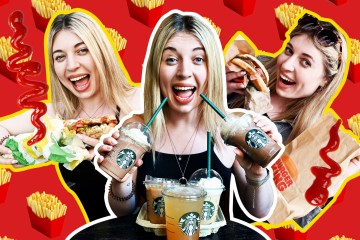 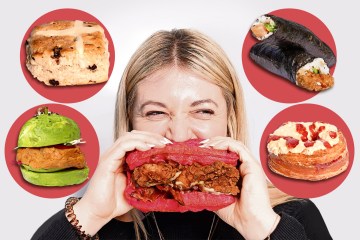 As an extremely novice cook, I was very worried about getting this right, but it was quite simple, and only took about 25 minutes in total.

I spread the breadcrumbs on the chicken, with the help of some egg and cornflour (which Waitrose is, surprisingly, cheapest for!) and then fried it.

Meanwhile, I mixed the Katsu paste with the coconut milk and heated it up in a saucepan, and heated the rice up (which was easy as it was microwave rice).

I then put the rice in the bowl, sliced the chicken up, and put the sauce, and a bit of coriander, on top. Added a little bit of mixed leaf salad – and voila!


You've been storing your digestives wrong… hack to keep them fresher

I think I did quite a good job of recreating the Wagamama’s dish – although the Aldi mixed leaf salad wasn’t quite the appealing side salad I’d hoped for (but you get what you pay for). 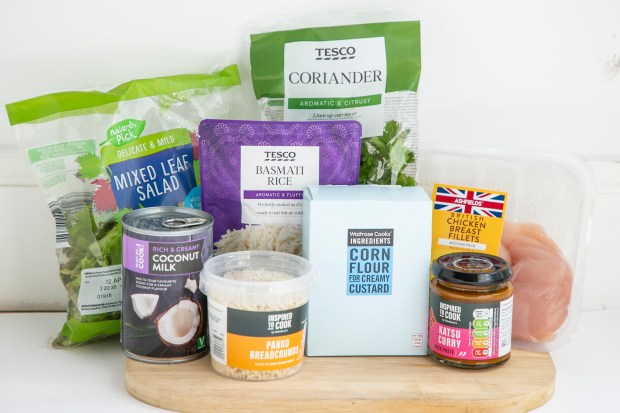 I was very excited at the prospect of being able to make a £9.79 Pizza Hut pizza at home for just £2.06, however it’s way too hard to make a pizza from scratch – and not worth the time!

I had to add my Sourdough Pizza Mix from Sainsbury’s with water and then knead it for 15 minutes, before putting it to the side to prove for an hour and a half.

At this point, I was already sure I’d screwed up as I had absolutely no idea whether I’d kneaded enough or too much – and not a clue what it should look like!

After the dough had proved, I fried it (which I had no idea you could do) and then I put my toppings on – peeled plum tomatoes, mozzarella and parmesan, all from Aldi.

I then added a bit of basil and put it in the oven.

When it came out, it didn’t look anything like the Pizza Hut margherita and was nowhere near as tasty.

Plus, there’s nothing that can beat the free salad when you’re actually in the restaurant! 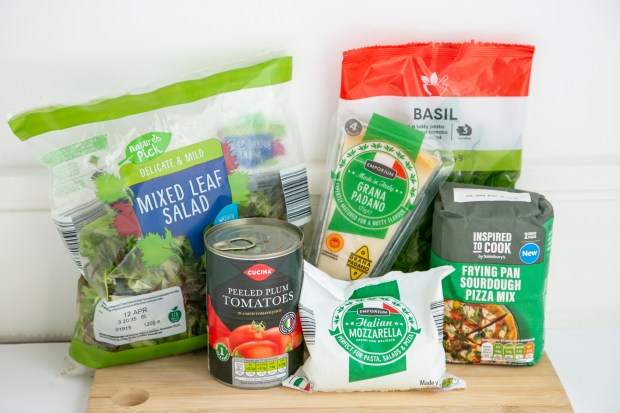 Nando’s chicken burger with Peri-Peri chips and spicy rice for £2.94

There’s not much better than a Nando’s chicken burger – and you can’t forget the Peri-Peri chips and spicy rice – but, at £12.75, it comes at a price.

By going to Aldi, Tesco and Sainsbury’s for the ingredients, I managed to save £9.81 and make the whole meal for £2.94.

And, thanks to Aldi’s piri-piri chicken recipe mix for 69p, this was a piece of cake!

All I had to do was marinade the chicken in the mix and shove it in the oven for 40 minutes, and also season the Aldi frozen chips with Tesco’s peri-peri seasoning and put them in the oven for 20.

Once that was all done, I simply put the chicken in brioche burger buns and added a bit of lettuce and tomatoes. And I had a Nando’s chicken burger that wasn’t too dissimilar to the real one, although a bit less saucey! 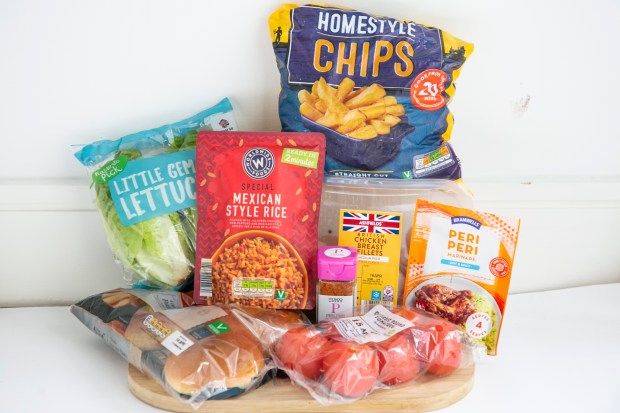 Tortilla Burrito (including guac) for £2.50

The best place to get one on the high street is Tortilla – who will charge £8.65 for one, if you get the guac added too.

However, I managed to make one at home for just £2.50, thanks to Sainsbury’s, Aldi and Tesco.

Sainsbury’s does a Mexican-inspired chicken recipe mix, which means I simply had to fry the chicken in it, put it in the wrap, and add all the ingredients on top of it.

By far, the hardest (and messiest) part of this was actually wrapping the burrito – and eating it!

Tortilla burrito (including guac) for £2.50 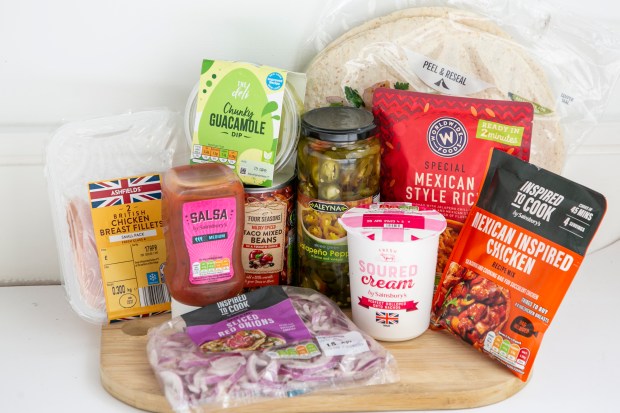 This was by far the easiest and quickest meal to make, thanks to Aldi’s Thai Green curry kit, which costs just £1.59 and includes the curry paste, coconut milk and salad.

All I had to do was mix the coconut milk and paste together, fry the chicken in the sauce with the veg included, and some extra baby corn and mange tout.

I then added some microwave rice on the side with a bit of coriander on top, and it was that simple! 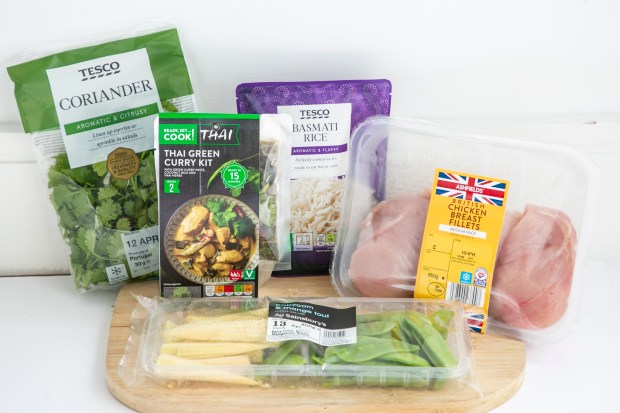 Eggs Benedict is one of those meals you don’t tend to make at home and only ever have at brunch in a posh restaurant – and it turns out there’s a reason why, as eggs are hard to poach!

I cheated and bought Hollandaise sauce – which Waitrose, surprisingly, does for the lowest price – because who has time to make it?

I found that Aldi sells eggs for the cheapest price at 85p for half a dozen, and I actually needed to use most of them because I didn’t get the perfect poached eggs first try.

Aside from the eggs, all the other parts of this meal were pretty easy with Aldi selling muffins for just 43p, and Sainsbury’s selling honey-roasted thick cut ham for £1.65. 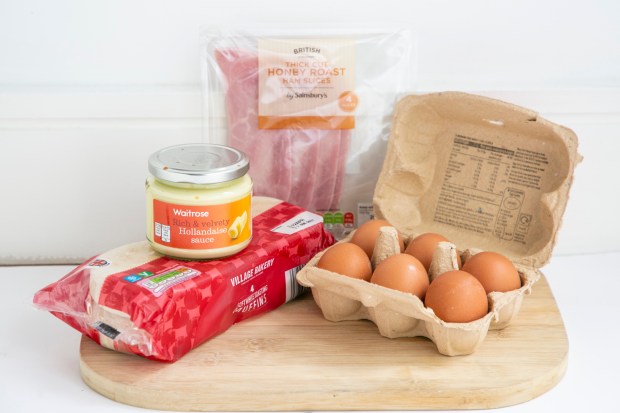 Can you cook chicken from frozen?

YOU’VE been out all day and when you get back home you discover you, or someone else, has forgotten to defrost the chicken for your evening meal – we’ve all been...

MOST dishes need garlic added to them – but cutting up garlic can be a pain, and you’re often still left with large chunks of it. Luckily, a chef has revealed...

DO you ever get frustrated when you buy bread and it goes stale before you’ve finished it? It turns out there is a very savvy hack to restoring your loaves in...

Mini Cheddars fans furiously debate whether the snack is a crisp or a biscuit – but what do you think?

WE’VE all had these heated debates about our favourite foods. Should tea be very milky? Do you put ketchup in the fridge? Are Nice ‘n’ Spicy Nik Naks the best of...

THERE’S nothing quite as heart breaking as going to dig into your fresh berries only to discover they’ve already gone bad. It feels like as soon as you leave the shop...

FOR THOSE of you that have a tub of ice cream in your freezer, you might want to listen up. It turns out that we’ve been eating ice cream wrong our...