The 50-year-old former Scotland international announced on BBC Breakfast that he was diagnosed with prostate cancer in February.

The couple have two children – Reuben and Lois[/caption]

Logan played 70 times for Scotland before retiring in 2003[/caption]

The 70-cap Scotland, is married to TV presenter Gabby, 49, who sat alongside him looking emotional as he revealed his diagnosis.

And it was Gabby advising her husband to get checked that resulted in him being diagnosed.

Bravely speaking out, Logan said: “I was actually listening to one of the episodes about menopause about women and their hormones falling off a cliff.

“As I was going through this in my head, and I thought ‘what about me’, ‘what is happening to me’, and Gabby said that I should go and get checked. 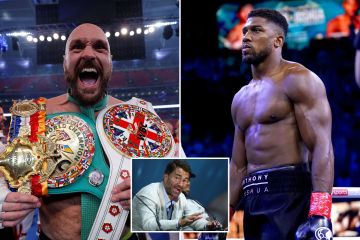 ‘WE WANT THE FIGHT’

Sign up to our new weekly betting newsletter for tips, free bets and price boosts

“I went to get a wellness check and he said that everything was fine with my hormones but your prostate is high, your PSA is high so you should go and get checked.

“I had a biopsy, but this year on February 7 I was diagnosed with prostate cancer, which was a huge shock.”

Logan then had to choose whether to undergo radiotherapy, brachytherapy, or surgery to have his prostate removed.

The former rugby star opting for the latter.

NOT GUNNER BELIEVE IT

He continued: “I ended up deciding to take it out. So I’m now three months since the operation, had the prostate out.

“It’s hard when you’re told you’ve got cancer – and I’d literally fell over it, I didn’t see it coming, no symptoms whatsoever – I had to go looking for it.”

Gabby said: “I think that was the shocking thing for both of us that the day before he went in for his operation, I’m jumping forwards a bit, he’d done a bike session.

“He had no pain, he had no symptoms. And to go in and have surgery which is a really invasive surgery and it obviously takes a long to recover from you’re going to feel a lot worse after it.

The couple will discuss Logan’s diagnosis on Gabby’s The Mid Point podcast.

And the former sports star Logan finished by urging people to “go looking” for the illness, and said blood tests can be booked through local GP’s.

Logan and Gabby have been married since 2001.