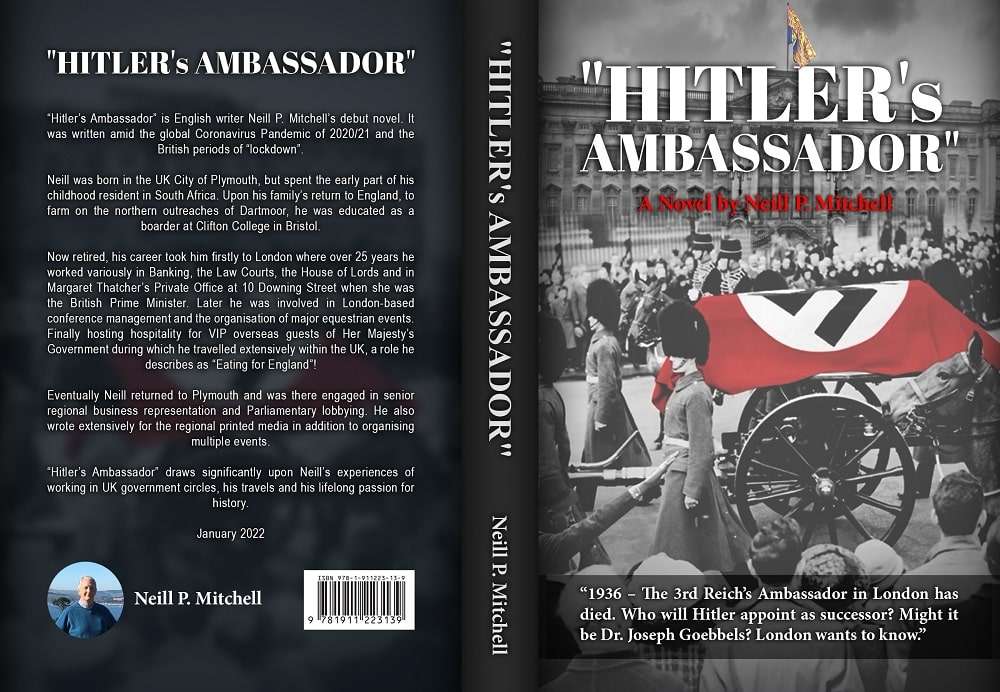 Recently published “Hitler’s Ambassador” by Neill P. Mitchell (Amazon Books) takes readers vividly back to the foreboding Berlin Olympic year of 1936. The fictional storyline and travelogue revolves around “what if” Hitler might choose the charismatic Dr.Joseph Goebbels to serve as the Third Reich’s Ambassador in London?

Throughout April-August 1936 the post was vacant, with the popular Anglophile Prince Otto Von Bismark deputizing as Charge D’Affaires. If appointed Ambassador, might Goebbels have subsequently laid the foundations for Hitler to be invited to London in May 1937, as the Reich’s Head of State, to attend the new King’s Coronation?  Could there have been a bi-lateral Anglo-German Summit Meeting in 10 Downing Street, or at the British Prime Minister’s country residence “Chequers,” either with Baldwin before the Coronation or Chamberlain later?

Might the intelligent, debonair, and sharp-witted Goebbels have facilitated Hitler’s vision for a pact between the 3rd Reich and the British Empire? Would Churchill have ever become Britain’s Prime Minister? Could detente have avoided the Second World War?

Today readers may speculate with the benefit of hindsight but, in 1936, London was anxious to prepare for all eventualities.  Where would the torrent of unfolding events lead?

The action is relentless, with readers left in suspense until the last pages.

Neill was born in the UK City of Plymouth, but spent his early childhood resident in South Africa. His career back in the UK took him first to London where, over 25 years, he worked variously in Banking, the Law Courts, the House of Lords, and in Margaret Thatcher’s Private Office at 10 Downing Street when she was the British Prime Minister. Eventually, Neill returned to Plymouth and was engaged in senior regional business representation and Parliamentary lobbying. He also wrote extensively for the regional printed media and organized multiple events. “Hitler’s Ambassador” draws significantly upon Neill’s experiences of working in UK government circles, his travels, and his lifelong passion for history.