Doctors don’t normally have a celebrity-like status, but Dr. Evangelos Viazis, a Fastbraces® expert, has earned himself quite some stardom. As a trailblazer in the field of orthodontics, he is credited with bringing the Fastbraces® technology to Greece, a fast and safe method for moving and fixing teeth. Dr. Viazis’ work, particularly with Fastbraces®, over the past two decades, has made him an orthodontics legend in Greece and beyond.

For Dr. Viazis, adopting Fastbraces® didn’t need second thoughts as it’s his brother’s invention, Dr. Anthony Viazis. His brother developed the revolutionary technology in 1992 in Dallas, Texas. Since then, thousands of dentists have adopted the technology to provide their patients with a fast way to straighten their teeth without needing to wear braces for over two or three years. Of course, it was only natural for Dr. Viazis to adopt his brother’s invention and bring it to Greece. But it wasn’t just his family connection; it was more about his passion for orthodontics and helping future dentists around the world to learn such revolutionary practices. 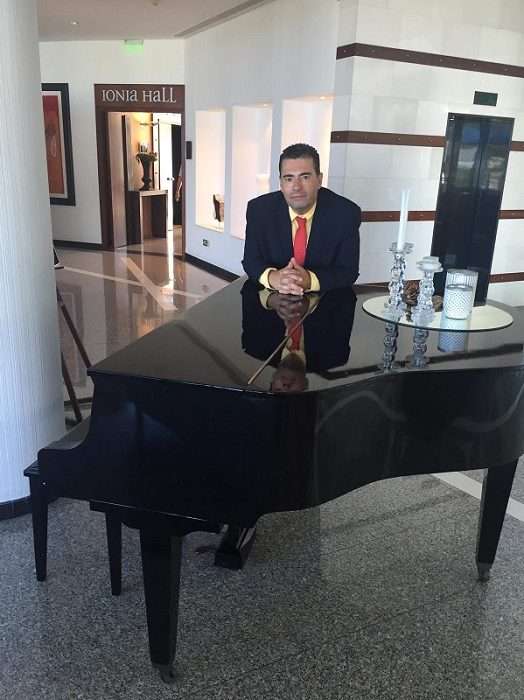 candidates in Greece’s national university entrance exams. After graduating, he opened his first clinic in Athens in 2000 and brought Fastbraces® to the Greek capital. He was providing orthodontics and general dentistry services at the time, but it was Fastbraces® that became his true passion. In 2004, he decided to pursue orthodontics exclusively and opened two new locations in Athens.

He has established his name in Greece with his high success rate of orthodontics cases, even some rare and challenging ones. Today, he teaches and guides dentists all over the world about Fastbraces®. He has even written a book, Fastbraces® Greece, Atlas of Clinical Cases, that serves as scripture for ambitious young dentists looking to train in the technology.

Dr. Viazis also enjoys a strong online presence and has appeared on TV and online talk shows to talk about Fastbraces®. His official orthodontics account Fastbraces Greece has over 125k followers. He has a charming personality and eloquence in his speech, making him a great public speaker. He breaks down the concept and the technology behind Fastbraces® so well that even patients who are hesitant about braces develop an interest. He has personally delivered so many successful cases that other dentists refer to in their speeches or training sessions for Fastbraces®.

While he has made Fastbraces® popular in Greece, he is now bringing it to other European countries. With his help, Dr. Andreas Aspros successfully brought the technology to Cyprus. He attends seminars on orthodontics around the world, giving his insights on the fast and without surgery methods of straighten teeth. From Fastbraces® Meetings in London to Harvard Club, he has braced many conferences and events with his knowledge and inspires dentists worldwide. He is also an avid traveler, exploring unique places and sharing his experience with his followers on Instagram.

Florida was ravaged by the hurricane on Wednesday (Picture: AP/PA/Getty) Hurricane Ian has left a path of destruction in south-west Florida. It trapped people in flooded homes, caused extensive damage to...