She quit after 44 days of economic turmoil and Tory infighting — with her rival Rishi Sunak firm favourite to seize the keys to No10.

In a shock move, Boris started a bid to get his old job back.

But Tory chiefs said candidates would need the backing of at least 100 MPs to have any chance of going to a ballot of party members.

It triggered claims of a “stop BoJo stitch-up”.

He was installed as one of three favourites — with Mr Sunak and Penny Mordaunt — and took an early lead with at least 44 Tory MPs getting behind him. 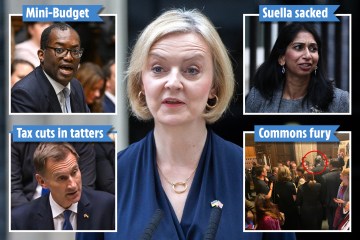 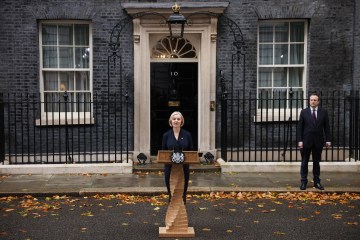 Tory chiefs, including 1922 Committee chair Sir Graham Brady, yesterday said candidates need to be nominated by 100 MPs — a threshold which Boris supporters fear he might struggle to meet.

One party donor, who has given millions to the Tories, said last night: “This is a total stitch-up.”

A Boris-supporting Cabinet Minister told The Sun: “Sir Graham has engineered this in a way that would make [ex-Zimbabwe tyrant] Robert Mugabe blush.”

And Tory MP Marco Longhi said: “I am backing Boris and as a democrat it’s important that members have their say.


Who do you think should be the next Prime Minister? Take our poll to vote

“He is the only person that commands that authority given to him by the public at a General Election. Please come back, Boss.”

Allies of Boris said he could form a potent partnership with Mr Sunak — with Boris as the successful campaigner and his ex-neighbour as his deputy, stabilising the economy.

The pair would have to make peace after months of feuding, which also saw Boris back Ms Truss for the leadership.

But friends of Mr Sunak say that, while he wants to bury the hatchet, he aims to become PM so he can get on with the task of rebuilding the battered economy.

BoJo is expected to cut short a Caribbean holiday to win backers, less than seven weeks after he walked out of Downing Street.

Allies including his “Mr Fixit”, MP Nigel Adams were last night making frantic calls to build his support base, believing he is the only candidate who can avoid a wipeout at the next election.

Former candidates Kemi Badenoch and Suella Braverman are considering whether to run again.

Boris-backer Tory MP James Duddridge said: “I hope you enjoyed your holiday, Boss. Time to come back. Few issues at the office that need addressing.”

The move should be no surprise as when he left the Commons for the last time he declared: “Hasta la vista, baby!”

But critics insisted that bringing him back as Tory leader would split the party for good.

Some were even contemplating quitting the Commons in despair, triggering a series of by-elections which would threaten to reduce the Government’s majority.

Mr Johnson still faces a privileges committee probe into whether he lied to Parliament about what he knew about Partygate.

The Sun can reveal that No10 has already handed over documents, emails, pictures and messages to the committee.

One insider said the evidence was so damning it was likely to lead to a Commons suspension, adding: “Boris is screwed.”

Labour’s Harriet Harman is leading the probe which is expected to start before the end of November.

The group wants to call BoJo to give evidence in person — leaving him facing the prospect of a damning hearing even if he pulls off a stunning comeback.

Last night MPs and ministers were openly speculating whether he would have the numbers to officially kill the probe if he were to put it to a fresh vote.

But anti-Boris MP Robert Syms warned: “Boris is not a serious candidate.”

And colleague John Baron told the BBC: “I would find it impossible to serve under Boris . . . coming back being Prime Minister — that ship has sailed.”

And after an urgent meeting, party bosses agreed the 100-MP threshold must be reached by 2pm on Monday for candidates to secure their place.

If they agree on one candidate they could even skip party members and crown a leader that day.

Otherwise a maximum of three people could get through to the next round, and would be whittled down by votes on Monday evening, with a hustings event for politicians to grill them.

An event for party members to quiz candidates is also pencilled in for next week.

Two final MPs would then be put to members via online ballot — with the new leader crowned by Friday at the latest.

Party chief Jake Berry insisted the process would be safe, despite concerns over state hacking during the last contest.

He said: “We are satisfied the online voting system will be secure.”

Mr Sunak is the bookies’ favourite, with supporters coming forward to back him despite no official confirmation he will stand.

Former Cabinet Minister Simon Hart added: “After the last few weeks the very least we can do for the country is get the right Prime Minister this time. No time for experiments; no time for frivolity; no time to line up a job offer.

“This means choosing someone serious, tested, competent and kind. For me that’s Rishi Sunak.”

Health Minister Robert Jenrick, who backed Mr Sunak over the summer, said the party faces wipe-out if they get the choice wrong.

He added: “The Conservative Party faces extinction. This isn’t an ordinary leadership contest.

“If we get this wrong, the country will face a very serious period of further instability and the party will lose the next General Election, potentially cease to exist.”

Mr Wallace is being urged to stand despite insisting earlier this week that he wants to remain in his job.

Ms Mordaunt is expected to run after she got 105 votes and third place in the summer.

She was backed by Tory MP Robbie Moore who said: “She is able to unite our country.”

Allies of Chancellor Jeremy Hunt and Foreign Secretary James Cleverly were ruling out their chances.

SINCE stepping down as PM Boris Johnson has dropped a series of hints suggesting he would like another term.

CLUE 1: He memorably ended his Commons swansong with the farewell “Hasta la vista, baby”. The phrase was popularised by Arnold Schwarzenegger’s Terminator who also famously says: “I’ll be back.”

CLUE 2: In his final goodbye outside No10 he compared himself to Roman statesman Cincinnatus “returning to his plough”. Surely the classics scholar would have known that Cincinnatus later returned to power as dictator?

CLUE 3: Rather than disappearing completely from the political stage Mr Johnson has remained a passionate defender of Ukraine and was recently elected chairman of the Conservative Friends of Ukraine.

CLUE 4: His fiercest supporter, Nadine Dorries, suggested he should have been on the last leadership ballot — something the ex-PM did not deny.

CLUE 5: Unlike some of his predecessors he has not resigned as an MP so he could still stand for the job.